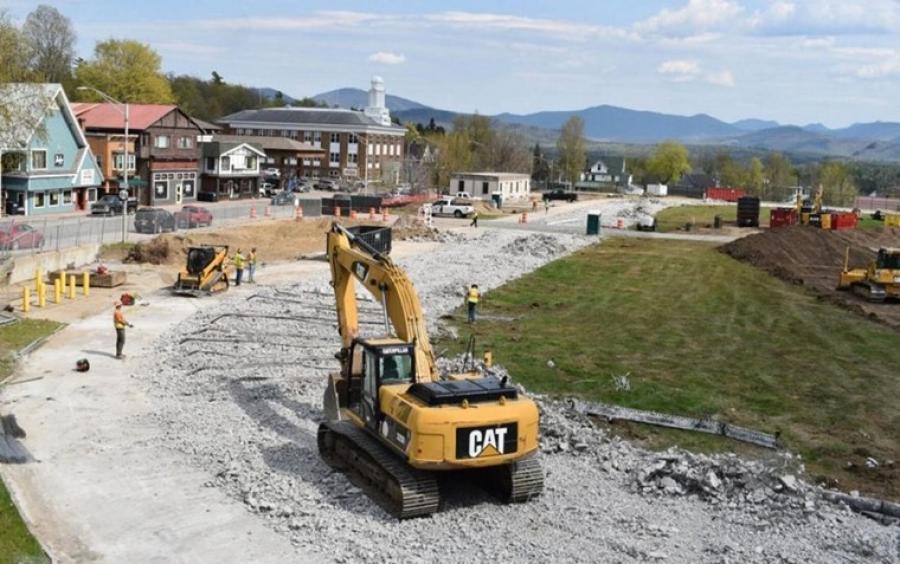 The redesigned rink will have an energy-efficient glycol refrigeration system and resilient polymer plastic pipes; 7 ft. of rink will be cut to install the pipes, then backfilled.

In an effort to attract more visitors to the Adirondack region and accommodate the 2023 Winter World University Games, major renovation projects are happening at Lake Placid's main attractions. Multiple construction firms are involved in the revitalization of iconic Lake Placid sites, including the speed skating oval, ski jumping complex and Main Street.

The northern New York town hosted the Olympics in 1932 and 1980 and is the site of the legendary "Miracle on Ice" game. The projects aim to reenergize and modernize the area while keeping the legacy of those historic Olympic Games alive.

"This is an improvement of what is really the hub of all the activity here," James McKenna, president of the Adirondack North Country Sports Council and CEO of the Regional Office of Sustainable Tourism explained. "I think it's going to be something where when we are all gone that it's going to be maintaining the legacy and vision going back to the early 1900s."

Over 11 days, the Winter World University Games will reignite the celebrated history of the Olympic venues by hosting more than 1,800 collegiate athletes from 50 countries — twice the number of athletes that competed in the 1980 Olympics.

In addition to hosting numerous record-breaking races, the renowned oval is the birthplace of the Olympic three-tiered podium. In February of 1932, American speed skater Jack Shea received the first medal presented atop a podium.

Long-track speedskating standards have changed since the 1980 Olympics, but Lake Placid's oval has been grandfathered in thus far. The push to update the rink came when the refrigeration system from 1977 failed.

J.H. Maloy is preparing the site for the redesigned oval by cutting 7 ft. of rink to install piping for water drainage and a new refrigeration system and backfilling and grading the surface. The old steel piping is being replaced with more resilient polymer plastic pipes.

The glycol cooling system is more energy-efficient than the previous system allowing ORDA to extend the outdoor oval's skating season. Lighter-colored concrete will be used on the track to help reduce melting.

The oval's redesign will allocate more space for spectators at the north end of the rink. The concrete flagpole bases with each Olympic nation's flag will be removed and replaced to expand the sidewalk. The oval is expected to be completed in time for the 2022 FISU World Speed Skating Championships, a five-day competition that hosts more than 75 athletes.

A team of 15 from Rifenburg Construction Inc., a Troy, N.Y.-based firm, with support from Park East Sales, a division of Rifenburg Companies, is renovating the Olympic Ski Jumping Complex located in Lake Placid, N.Y. The ski jumps were last updated in 1994.

"The Olympic Facility is being modernized after 42 years to meet current standards as we prepare to host the 2023 World University Games," said Ski Jumps' General Manager Rebecca Dayton.

This work will make the facility the only year-round jumping facility in North America that is sanctioned for both winter and summer competitions and training.

The underground infrastructure is being upgraded with new underdrains, irrigation and drainage. A steel observation platform also is being constructed.

To meet the sport's standards, the construction plan must be followed precisely. The steep slope and tight tolerances make this job uniquely challenging.

"This is the project they will tell their grandchildren about," Russell Huta, vice president of Rifenburg, said of his team.

Rifenburg recruited its best operators to grade the near-vertical slopes in a Cat dozer that was tethered to a concrete anchor and winched up the mountain. Project Manager Michael Coody is confident the Jumping Complex will be completed in October 2021.

With many local artisans and a variety of restaurants, the quintessential alpine street is the heart of Lake Placid. Along the entirety of Main Street, Kubricky installed approximately 3,000 ft. of 16 in. watermain to support increased use and meet current infrastructure standards.

To protect Mirror Lake from salt runoff and point pollution, a new storm drainage system with three infiltration vortexes and detention areas also is being installed. The construction required that traffic be reduced to one-way and many of the sidewalks were closed which made keeping pedestrians safely out of the construction zone challenging.

Before Kubricky can lay the wear course, work must temporarily halt in July and August, the peak of the summer tourism season. The road will be temporarily paved and normal traffic patterns will return to support the influx of visitors. When work resumes in the fall, the road surface will be paved and sealed and new sidewalks, curbs, landscaping and signage will be added to enhance driver and pedestrian safety and visual appeal. Main Street's renovations should be finalized by the fall of 2023.

Along with J.H. Maloy Inc., Rifenburg Construction and Kubricky Construction Corporation, Milton CAT is proud to be a part of restoring Lake Placid back to its glory days.