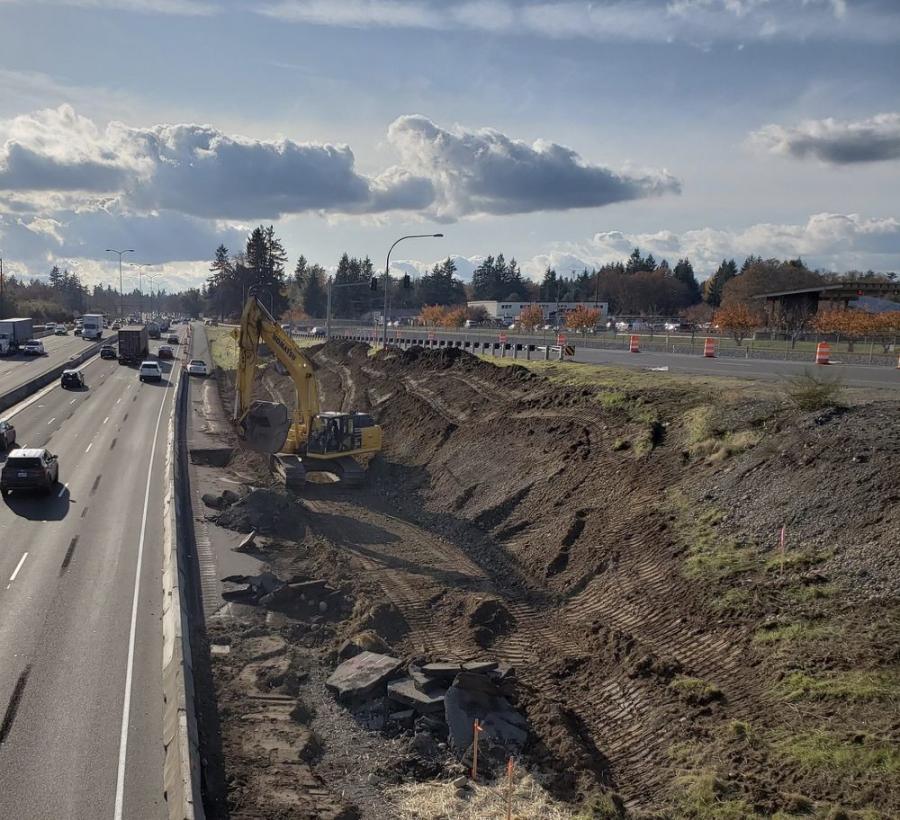 The project took three years to complete and will help relieve chronic traffic congestion and improve mobility along I-5 near JBLM.

Atkinson, in conjunction with the Washington State Department of Transportation, recently announced that the second phase of construction to widen I-5 and rebuild intersections is now substantially complete.

This construction benchmark — part of the $242 million project that rebuilt the Thorne Lane and Berkeley Street interchanges to allow for a wider I-5 — comes two months after new high occupancy vehicle lanes opened.

"We thank residents, businesses, commuters and service members for their patience during this complex project," said Washington State Department of Transportation Regional Administrator John Wynands. "This project was a success because of the great cooperation with those who live and work in this area."

The end of this portion of construction means the end to continuous overnight detours and ramp and lane closures on I-5 from Gravelly Lake Drive in Lakewood to 41st Division Drive at Joint Base Lewis-McChord (JBLM).

While most of the project is complete, a few minor items still need to be addressed by crews, but those should wrap up by the end of October.

"This was an extremely technical operation," said Brandon Dully, vice president of Atkinson Construction. "Our ultimate goal was to ensure that we executed the work according to our plan and did so safely. It took everyone — Atkinson, our hard working crews, WSDOT and our project partners — working together to ensure we [completed it] successfully."

Since October 2018, WSDOT's contractor, Atkinson Construction, removed and rebuilt the I-5 interchanges at Berkeley Street and Thorne Lane to make room for new HOV lanes. The new interchanges removed a potential conflict between passenger trains and vehicles and people who walk or ride. This work also raised the elevation of I-5 at Berkeley Street by 14 ft., eliminating the expense of maintaining water pumps in a location where I-5 sat below the water table.

In 2023, a third phase of construction will rebuild the I-5 and Steilacoom-DuPont Road interchange to complete widening of I-5. This will extend the HOV lane near 41st Division Drive in both directions into the DuPont area. WSDOT's overarching goal is to complete the HOV system between DuPont and the new HOV lanes that are nearly complete in Tacoma.

In 2024, a separate project off I-5 will build a new non-motorized path from Gravelly Lake Drive to Thorne Lane in Lakewood as the fourth phase of the overall work. The Gravelly-Thorne Connector will run parallel to but separate from I-5, providing access to Lakewood's Tillicum neighborhood for people who walk and ride.

Until the Gravelly-Thorne Connector is complete, bicyclists going south on I-5 from Gravelly Lake Drive will use the shoulder on the exit to Berkeley Street to access local shared use paths.

A future shared-use path for bicyclists and pedestrians that would run parallel to roads open to the public between Lakewood and DuPont is being evaluated by stakeholders.

Over the past decade, populations in Thurston and Pierce counties have grown exponentially, leading to increased traffic congestion along I-5. In recent years, WSDOT, along with local city, county and JBLM officials, have refocused efforts to improve travel times and operations on the existing highway.

In July 2015, the Washington State Legislature included $495 million for the I-5 Mounts Road to Thorne Lane Interchange — Corridor Improvements project, as part of the Connecting Washington transportation revenue package. This overall project was broken down into four separate construction projects, two of which are now complete.

Incorporated in 1996, Lakewood is located just outside JBLM and is considered the base's host community. It boasts several lakes, parks and golf courses in keeping with the emphasis on outdoor recreation that is a common in the Pacific Northwest. Lakewood offers affordable housing and a very short commute to JBLM and for these reasons is attractive to many military families. The town boasts amenities like shopping, dining and a farmer's market.

The gate to McChord Air Base is directly adjacent to Lakewood and I-5 runs through town, giving great access to Tacoma, Olympia and even Seattle.