Behind Ireland's Final Rebellion and … an American Dream 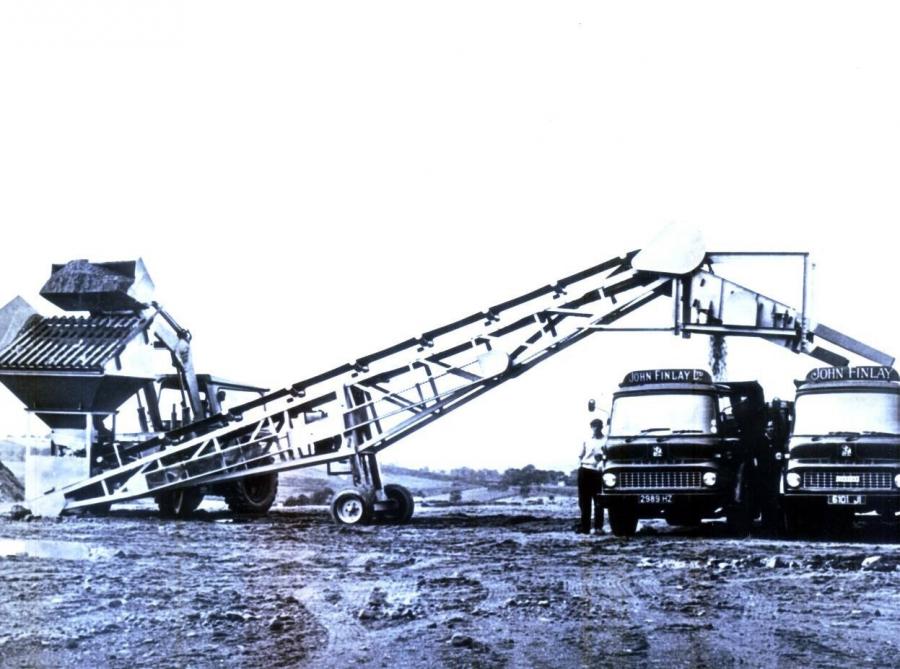 Seen here is the first portable screener made in Ireland — circa 1960 to 1962. Ireland was full of sand and gravel deposits left behind after the last Ice Age.

Construction people like to read about machinery and many of them like to read about other subjects, too — like history and war and such. Some people who make and sell machinery also like to write books and sometimes a writer comes out of this mix who can combine history, war and actual machinery into their books. I am such a writer — I played Cowboys and Indians around sandpit machinery as a child in my native Ireland. Little did I know at the time that this type of machinery would one day be my livelihood and I would set up a business in South Carolina doing just that — Sand Science.

My new book ‘Ireland's Final Rebellion and An American Dream' is a two-book set. Book 1 is about the rebellion that succeeded in winning Irish freedom and the founding of The Irish Free State in 1921 — this year we celebrate the 100th anniversary of that great event. The protagonist in this book is based on my own father's life and his involvement in the Tan War of 1919-1921. My dad was an unassuming tailor, tall and straight, who always wore a shirt and tie and smoked Carroll's cigarettes. He was 57 when I saw the light as the youngest of his five children. We were a poor family among poor neighbors in rural County Mayo, Ireland. During my childhood, the introduction of cheap ready-made suits were destroying the livelihood of the tailor, but dad worked at his bench every day, making clothes or doing alterations for customers.

From an early age, I knew that he had been an active fighter during the 1919-1921 Irish War of Independence, and he received a small state pension for that service. He did not like to talk much about his participation in the conflict and deflected my questions about ‘The Tan War,' saying he would tell me more when I was older. I did hear enough in family-circle conversation and from listening in on the regular get-togethers of his Old IRA comrades at our tailor shop to form my own picture of his life.

Born as the second of eight children in 1897, he grew up in a turbulent period of Irish history — the high emigration aftermath of The Great Famine, the tail end of The Land Wars tied to the Land League, World War 1 and the 1916 Easter Rising. He was very close with his grandmother who lived into her late 90s. She was a Seanachie (Gaelic storyteller) who spoke only Gaelic and filled his head with the feats of the mystic warrior heroes of Irish Legend, and the torturous Irish history of the previous few centuries. He became active in various resistance movements (the IRB, Irish Volunteers and Sinn Fein) when the Irish population was revulsed by the summary executions of dozens of Irish Rebels from the failed 1916 Rising. Subsequently he became a full-time IRA fighter on the run during the 1919-1921 campaign and fought without capture up to the declaration of the truce. He was vehemently Anti-Treaty but chose neutrality during the Civil War rather than take up arms against his former comrades and went back to his tailor's bench — until he was arrested and imprisoned by the Staters (Free State Army).

His incarceration at the Tintown internment camp in The Curragh, Co Kildare took a toll on his health, and he was close to death when the prisoners' hunger strike was finally called off. After his release, he returned to his tailor trade and eventually married and raised a family. He died suddenly in April 1969 and I was left with only memories and unanswered questions. One of those memories was that of his expressed regret at not having emigrated to America like many of his war comrades did.

At his funeral, I decided that I would make good on his missed opportunity — I would someday emigrate to America. Book 2 is based on my long journey — having to grow up in a hurry when my father died, I worked my way through college and set off on my quest for the Holy Grail — America.

After various jobs around Ireland, I found my way back to the sandpit machinery. I was fortunate to get hired by an Irish corporation that was manufacturing portable screeners and they had the vision of sending their salesmen to the corners of the world to find customers — that was music to my ears.

I worked for them all over England and then spent some years based in South Africa selling into the vast mining market there, all the while looking for my opportunity to go to America. That chance finally came, and my wife and I arrived in South Carolina in January 1985 and we started from scratch. It was a baptism of fire as I struggled to understand their Southern accent and they struggled to keep up with my fast-talking Irish brogue.

My target prospects were mostly using large static machinery in the sand mines and quarries, and ever so politely told me that they had no place for my small portable equipment. Being that I was in the Bible belt, I set my sights on a biblical theme to win them over — ‘instead of bringing the mountain to Mohammad, why not bring Mohammad to the mountain.'

We took our portable screening machines right up to the sandbank face, and instead of the mine owner hauling product to his stationary processing plant, we got his customer to haul the screened material across his pit for him and over his scales. The rest is history (as the saying goes) and brings us back to the double history lesson of the book. Over the years, we have built a successful processing machinery business that today serves the greater southeast region of America. Our two American-born sons joined the business after graduating from the University of South Carolina and are already helping to expand it to new heights.

Despite the pressures of running this business, I have managed to find the time (that means late night and early morning hours) to explore my writing hobby. I wrote and published ‘The Kimberley File' several years ago, a novel about an unwitting machinery salesman in South Africa caught up in the world of illegal diamonds. That story takes place mostly in the southern countries of Africa, with part of the story unfolding in Ireland. It has taken me many years to find a suitable narrative voice to tell the story of the hard struggle that young Irish women and men like my father endured in The Tan War of 1919-1921. They finally won the freedom that Irish rebels had fought and died for over 700 years, resulting in the creation of The Irish Free State in 1921, followed immediately by a savage and bloody Civil War between the Pro and Anti Treaty forces.

The objective of Book 1 ‘Just One of the Boys' was to use the fictional Kane family to portray the events in Irish history that propelled ordinary Irish men and women to take up arms in 1919 and fight the occupying British authorities to a standstill and to the negotiating table. It was these fearless fighters and the general population of Ireland who sheltered and cared for them, that secured the Irish victory — they are the unsung heroes that I wanted to highlight and raise to their rightful place.

I thought it fitting to continue the Kane family history theme to the fulfillment of my father's dream with Book 2 ‘An American Dream.' In this book, Sean Kane portrays my own life journey as I pursued that dream. An Irish Catholic landing into the heart of the Bible belt of the American South certainly added up to a personal and business challenge, but we were blessed, and it worked out fine — we continue to live and work and prosper in this great country.

‘Ireland's Final Rebellion and An American dream' was published through KDP Amazon on March 1, 2021, and is available on Amazon.com as both an e-book and paperback.

It is an enjoyable read, especially around St. Patrick's Day and during these trying times that we are all going through.

Author website is www.michaelgerardauthor.com where a link to Amazon is available. Readers comments are always welcome at michaelgerardcmi@gmail.com.