After already working hard in your snow removal operation in the wake of late 2020’s heavy winter weather, you may now have discovered the need for an additional attachment or are simply looking to augment your business’s current stock of snow equipment. 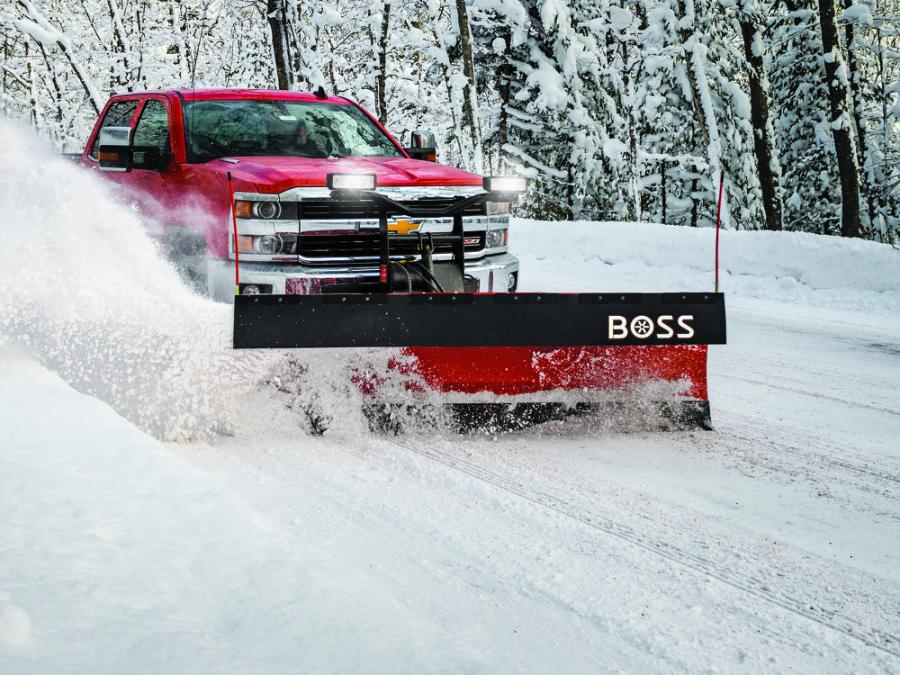 If so, you probably also have a good relationship with the dealer from whom you purchased this equipment. Along with talking to a dealer, read all you can about these pieces online and seek out other contractors for their opinions on these tools. Having a set of questions and a wish list of possible winter attachments when you come into the dealership will better target the products you end up buying.

Another key element to have in mind in deciding which piece of equipment or attachment to acquire is figuring out how much snow and ice you are likely to have to move and where you will need to move it.

For instance, snow buckets are used on small jobs and fit perfectly onto skid steers, wheel loaders and trucks. Because of the relatively small size of the skid steer and its bucket, that combination works well in limited areas, although they can dig and load a lot of snow to move to nearby open land or into the back of a truck for removal. Your snowplow may give you capacity and efficiency, but you’ll only get snow lifting ability with a bucket on a small loader. A similar attachment is the snow basket, which is shaped like a bucket, but possesses open slots on all four sides to allow melt water and air to leak out, giving the operator more room for packed snow and ice.

HLA Snow — Headquartered in Ontario, HLA Snow produces nine skid steer bucket models, with inside widths ranging from 60 to 120 in. These attachments are noted for being able to pick up and move a great deal of snow per pass. The largest bucket — at 120 in. wide — has a heaped snow and ice capacity of almost 60 cu. ft. HLA also makes nine snow baskets — lightweight and large capacity buckets with slotted designs. HLA’s snow buckets and snow baskets have heavy-duty grating along their top edge to give operators maximum visibility.

Pro-Tech — This Rochester, N.Y., company is a very popular manufacturer of multi-use snow and ice removal equipment. Included in its showrooms is the custom-made Sno Basket, a lightweight, slotted bucket that allows for easy loading and hauling of snow. Its flat-bottomed design allows for maximum collection of snow from piles, while also offering more than twice the capacity of most backhoe and compact wheel loader buckets. The Sno Basket comes with a durable, replaceable steel cutting edge that greatly reduces the amount of wear to the attachment. Pro-Tech crafts its snow baskets in custom sizes, generally from 8- to 12-ft.

Some blower attachments, on the other hand, can toss snow up to 45 ft. away from a paved surface. Skid steers and compact loaders equipped with blowers work extremely well in parts of the country used to heavy snowfalls. In addition, snow blowers are designed to remove snow from a surface’s edges. In doing so, a blower makes the edges clean and square, something a snowplow cannot do very well. Single-stage blowers use one auger to move snow into them and back out their chute. In heavier snow belt areas, two-stage blowers are more commonly used as they have a larger motor and two augers — one to pull in the snow and another to propel it through the vertical chute.

Case — Case Construction has a full line of rugged snow removal equipment that can power through any project and easily maneuver into hard-to-reach places that trucks and plows can’t touch. Perfect illustrations of those abilities can be found in Case’s 13 different snow blowers for skid steers and compact loaders. Standard flow, high-flow and enhanced high-flow models are available to match the needs of any contractor. The two-stage hydraulic blowers blast snow up to 45 ft. through the electronically controlled, poly-lined chute. Direct drive motors on the attachments eliminate moving parts and wear. Case’s snow blowers also possess a range of auger widths with 60-, 72-, 84-, and 96-in. sizes.

MultiOne America — If you are looking for a smaller unit, possibly for use in property maintenance, MultiOne America in Springfield, Mo., manufactures six blower models that efficiently hurl large amounts of snow to the spot you want it. Also, when snow needs to be spread out evenly, these two-stage blowers are ideal, even if the snow is wet and heavy. Their powerful augers break up the snow before the fan throws it through the discharge chute. In addition, the chute can be rotated 200 degrees from the operator’s seat, with the discharge chute height angle manually adjusted. MultiOne America’s snow blowers are made with heavy duty frames and transmissions, along with replaceable cutting edges.

Unlike blowers, angle broom attachments work more carefully to brush away thin accumulations of snow from streets, parking lots, driveways, paths and sidewalks. They can easily be fitted onto any type of compact loader to brush, rather than scrape, and often trail a snowplow to do a more detailed clearing. Because of their design, angle brooms don’t compress snow; instead creating a high friction surface in their wake that gives cars and trucks better road traction.

Conterra Attachments — This Canadian maker of top-shelf construction attachments, located in Strathmore, Alberta, has a pair of power angle brooms that easily hook up to skid steers and compact loaders for heavy-duty snow removal. With 68- and 84-in. broom widths, the two models use hydraulics to adjust and move the attachment 25 degrees in each direction. Conterra’s Power Angle Brooms have a torsion suspension that keeps a consistent, correct bristle position and down-pressure in uneven areas while reducing excessive bristle wear. The attachment’s broom wafers are made with a poly steel blend for longer bristle life.

Caterpillar — Five different angle broom models make up Cat’s impressive line of snow and ice attachments. These precision attachments are engineered for wheel loaders, skid steers, multi-terrain loaders and compact track loaders. Customers can choose between hydraulic and manual angling models with sweeping widths from 83 to 118 in. Cat’s brooms are built to sweep straight or rotate 30 degrees to the left or right. Polypropylene and wire are combined to create bristles with tremendous durability and extend the broom life.

Those contractors using either standard-, full or heavy duty-sized pickups, as well as skid steers and other front- and back-end loaders, can choose from a dizzying array of snowplow attachments. Noted for their versatility, these front-mounted plows employ a blade to direct snow either forward or to the side using a standard, straight-ahead plow or an angled blade designed to push snow off the road.

Moreover, equipment manufacturers build front plows that can be extended lengthwise for moving more snow, as well as V-plows, reversible plows and flexible plows to accommodate the varying contours of a road. There are also back-mounted plows for pickups that drag snow forward in a manner that is often more efficient than using a bucket.

Ask a trusted dealer about the reliability of the cutting-edge blade systems on a plow’s edges. The best snowplow makers employ their own blade designs or rely on proven tool companies to supply them with blades that slice through impacted ice and snow.

Boss — Boss Snowplows of Michigan has 10 different plows in its model line for pickups, including the unique new BOSS DRAG PRO, a rear-mounted attachment built to pull snow forward from the back. With a standard ¾-ton pickup truck, an operator can expand the plow’s hydraulic folding wings from 8 ft. to either 12 or 16 ft. to tackle more snow with each pass — a big money and time saver. The down force of the plow helps the DRAG PRO scrape more cleanly and efficiently than many traditional plows, especially in wet snow. If used in tandem with a BOSS straight-blade plow, EXT plow or V-plow, a contractor can create an ultimate expanding plow rig to give a huge boost to his or her productivity.

Metal Pless — If you’re planning to use your pickup for plowing snow, a PickupMaxx plow from Metal Pless is a prime choice. These durable snowplows have hydraulic wings to give you a variety of blade positions — directional up to 180 degrees. The PickupMaxx side wings are tempered with abrasion resistant steel plate to make them last through the worst winter weather for years to come.

Made in Quebec, four different PickupMaxx models are available featuring box, scoop and extended plows built from 8 to 15 ft. in width. The PickupMaxx also has a quick attach system with two headlights installed on the blade.

Sno-Way — For more than 30 years, Sno-Way snowplows have been recognized as some of the best equipment in the marketplace. Straight from the “frozen tundra” of Wisconsin, Sno-Way currently offers its Flared 29VHDSKD Series skid steer attachment, a contractor-quality multi-position V-plow.

The Model 102 provides superior snow rolling performance and unmatched durability for demanding applications. The model sports a 30-degree angle plow, along with Sno-Way’s trademarked Ground Hugger blade design and MaxADJUST leveling system that allows operators to make needed adjustments in front of the plow rather than having to go underneath it.

Get Pushy With That Snowfall

The definition of a snow pusher couldn’t be more straightforward: it shoves snow ahead as the skid steer or wheel loader it is attached to moves forward (the attachment is not designed for use on pickups). Though like a plow, a snow pusher differs in that it has a fully enclosed box-like design to hold snow gathered by multiple scrapers rather than a single blade. Built to be softer than a harder edge snowplow blade, a pusher’s scrapers along its bottom edge ensures more snow is removed from the asphalt or concrete.

Generally, snow pushers are utilized in open areas such as parking lots, since the attachment is meant to transport and stack large piles of snow. As a result, it’s often the preferred tool for contractors wanting to transport snow, rather than simply shoving it off to the side. Snow pushers mounted on skid steers have always been a terrific match. Together, they’re perfect for clearing snow in relatively small areas and also are found working around apartments, condos and areas adjacent to streets and storage facilities.

Hiniker — Almost 50 years of experience has made Hiniker an expert in designing and making tough, productive snow and ice control equipment, including its new 3600 Series snow pushers for skid steers. The two models in the line combine the simple efficiency of a box-type snow pusher with Hiniker’s famed workmanship and reliability.

A durable rubber cutting edge provides superior cleaning on paved surfaces while heavy-duty steel skids carry the pusher over uneven surfaces. Rest assured, you can move a lot of snow with a Hiniker 3600 series pusher enhanced by 3/8-in. thick steel sides and a capacity 36 in. deep.

KAGE — Osceola, Wis.-based KAGE Innovations has developed what may be among the most complete snow containment tools with its Snowstorm Plow System, a combination plow/pusher for a single mid-sized wheel loader or backhoe loader. The KAGE system possesses the advantages of both snow removal methods and can be reliably switched from one to the other from the cab in seconds.

The regular snow pusher box would be less than productive without having another piece of equipment along to do back dragging, scraping and general cleanup. But, the KAGE Snowstorm System can angle and catch escaping snow from the corners, even with the pusher attached.

Unlike a sectional snow pusher or other steel edge containment plows that have complicated trip edges, Pro-Tech’s resilient attachment has minimal moving parts and uses a corrosion resistant polyurethane hinge instead of springs, bosses and levers. The Steel Edge Sno Pusher is available in sizes ranging from 6 to 18 ft. for loaders, backhoes and skid steers, and has no stacking or speed limitations.