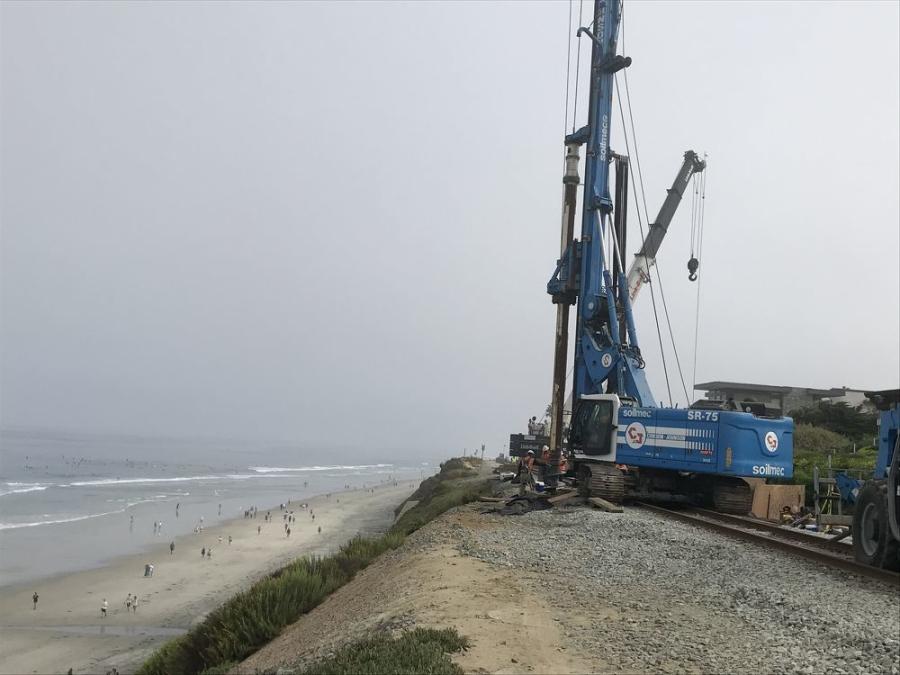 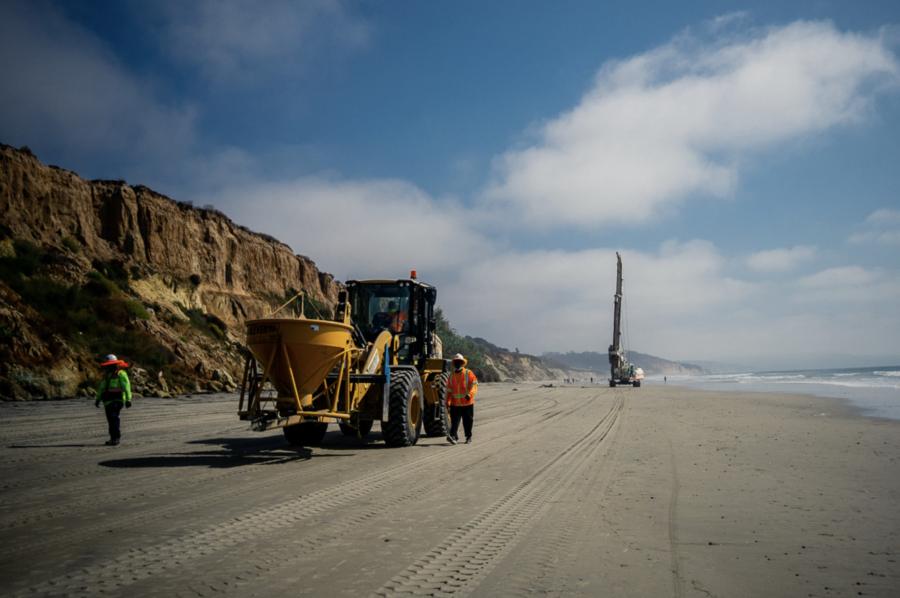 The result: a $10.5 million emergency coastal rail corridor repair project that temporarily slowed, but didn't halt, train travel as work commenced in March on the installation of 13 sea walls, tie back systems, drain channels, grading and landscaping slated for completion in June 2022.

"Our expertise includes structural concrete, road paving, electrical and landscaping, all of which are part of this project," said Shahram Elihu, project manager. "We tapped Condon-Johnson & Associates (CJA) as our main subcontractor because of its knowledge and expertise." A second subcontractor, Nu-Line Technologies in Encinitas, provided cured-in-place-pipe lining to repair existing drainpipes.

In business since 1974, CJA has projects throughout the western states, Alaska and Hawaii. Its expertise in deep foundation, earth retention and ground improvement made it a natural candidate for this unusual project.

Unusual, because the California Coastal Commission typically opposes sea walls. Why? They restrict public access and can cause coastal erosion. Exceptions are made for emergency repairs to infrastructures. In this case, the railroad.

The scope of the project is impressive. Elihu said it included the grading and exporting of 3,500 cu. yd. of soil; the installation of nearly 200 steel beams, 250 yd. of concrete drain channel and 1,500 sq. ft lagging.

Furthermore, the project called for 10 soldier beam walls ranging in size from 6 to 14 ft. high and from 67 to 387 ft. long. Three of the walls — one beach and two at track level — are emergency walls. 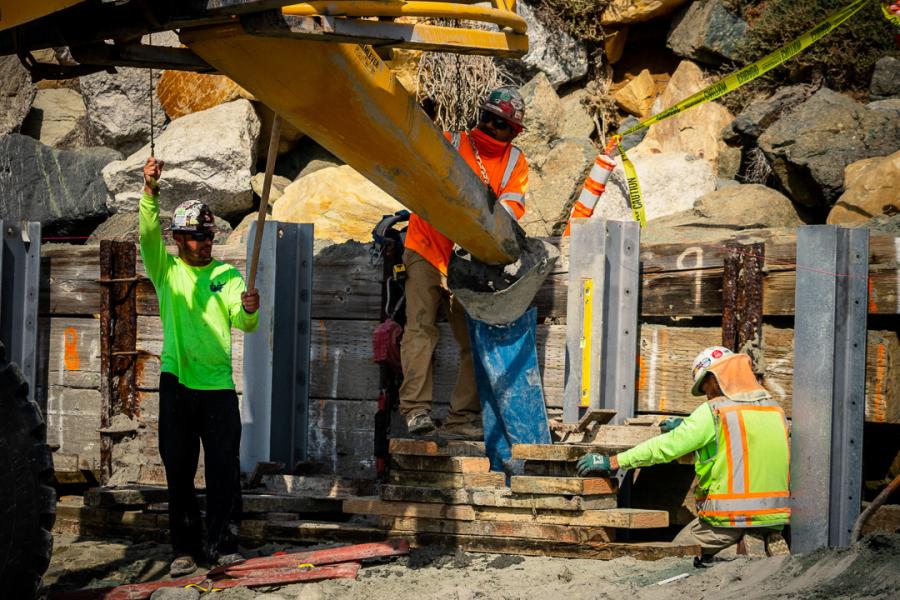 "With Blue Pacific having prepped the site, CJA installed piles from the tracks under a four-day absolute work window at track level," Lincke said. "Blue Pacific then excavated for the tiebacks, and we completed the installation of the tiebacks. Then we post-grouted, tested, capped and grouted the anchors. Blue Pacific followed with the installation of the rebar and the pouring of the cap beam. Then it rebuilt the bluff while the lower steel was being mill rolled, drilled for lag bolts in each flange and sent for galvanization. Thereafter, we began mobilizing with beams and equipment, drilling and completing the piles at beach level. Blue Pacific then completed the wall backfilling and some rebar/concrete work at the face, including the drainage outlets."

Props also go out to SANDAG, Lincke said, for its timely vetting and answers to project-related questions.

Emergency beachfront emergency projects pose unique challenges. Most notably, how to maneuver heavy equipment when access is limited, and beachgoers are many. 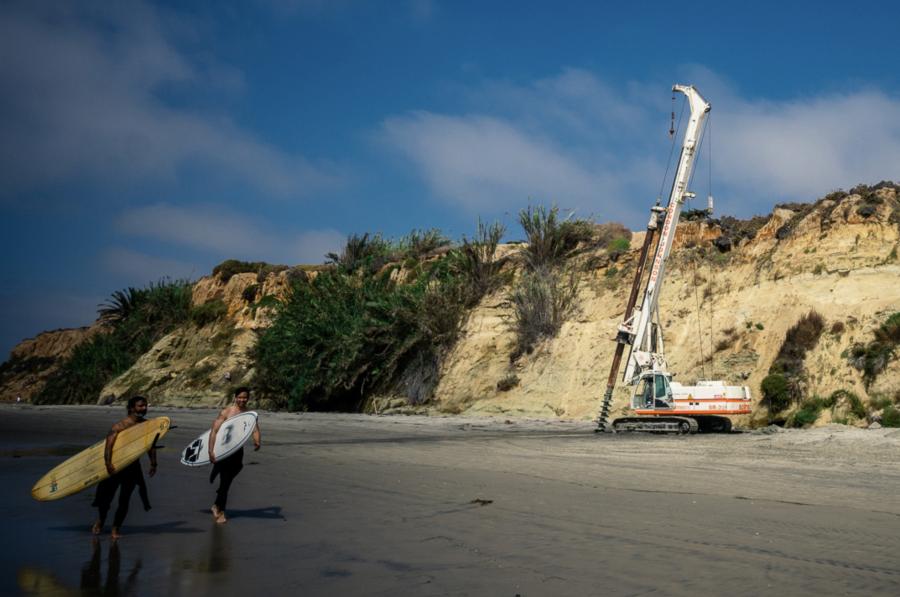 "When it came to supplying concrete, work on the upper bluff walls was relatively easy due to clear street access," Lincke said. "Not so with regards to work on the lower bluff walls near the beach. The sands are bad and it's a long distance to the water. Therefore, we decided to scratch the forklift and walk a two-cu.-yd. bucket a half-mile to a mile each day. Using big tires on the loaders, and having a flagger in front and behind, we didn't have any issues to speak of."

That's not to say work moved along quickly. "Since we were performing the work primarily during the summer when the beach is heavily populated, we moved along slowly — about 1 or 2 mph — using flaggers in different areas to make sure our trail remained clear of beachgoers," Lincke said.

This practice of walking the equipment also was followed for installation of the soldier beams and tiebacks for reinforcement of the retaining walls.

"Blue Pacific built up the ballasts, enabling us to walk the equipment and materials, which included the beams, lagging, drill rig and loaders," Lincke said "This daily practice added an hour to get the work site and then another hour to take equipment back up to the street-level pad, which was figured into the estimate."

A study conducted by the HNTB consulting firm San Diego consulting firm and released by SANDAG in August recommends 15 drainage system improvements to be included in the next round of long-term stabilization efforts for the busy coastal rail corridor, expected to increase from 44 passenger trains and six freight trains daily in 2019, to 78 passenger trains and 22 freight trains daily in 2030,

While the end game calls for an alternative route through a tunnel, for now, the Del Mar stabilization efforts are expected to keep the bluffs safe for train travel. CEG