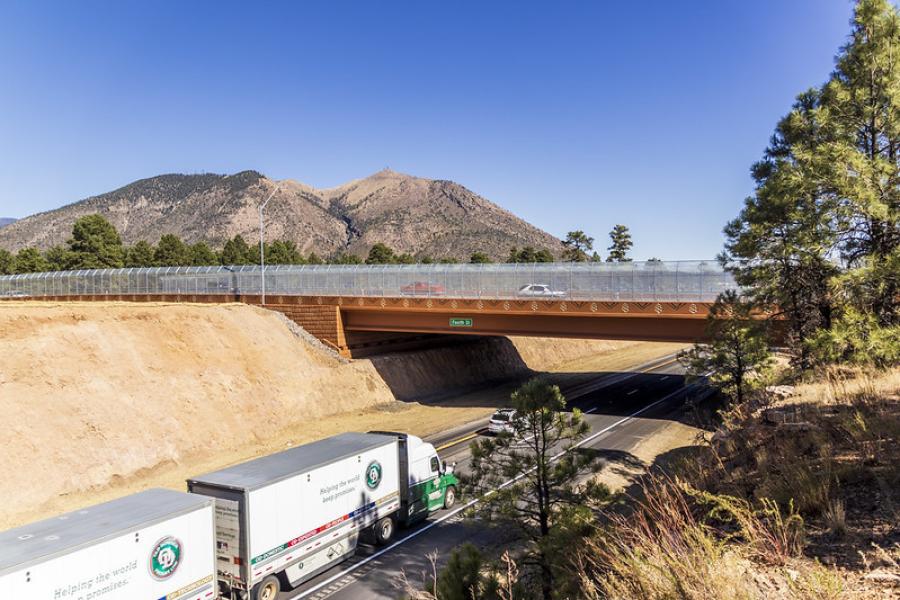 The Arizona Department of Transportation's Fourth Street Bridge replacement project in Flagstaff is receiving national recognition. The project is among a list of 12 in line for national awards from the American Association of State Highway and Transportation Officials (AASHTO).

The innovative bridge project has already won western regional recognition. For the national award, the three highest-scoring projects from each regional competition earn a place on a "Top 12" list of projects competing for the national Grand Prize — selected by an independent panel of industry judges — and the People's Choice Award, chosen by the public through online voting. In addition, those top national winners each receive $10,000 in cash awards to be donated to a charity or scholarship of the state DOT's choosing.

"This project has provided improved access to our campus for our students and families. It also has created safe and healthy alternatives for students who want to walk to school or ride their bikes," said David Lykins, superintendent at Northland Preparatory Academy, a charter school located near the southern end of the Fourth Street Bridge.

The new, wider bridge not only benefits the academy, helping students get safely to and from school, but also boosts economic development in the area with better traffic flow and more mobility options.

ADOT State Engineer Dallas Hammit explained the innovative bridge-slide method utilized for the project: "We used a slide technique where the new bridge was built, just east of the old one. That allowed us to move the new structure into place in about two weeks. This greatly decreased the inconvenience to the traveling public."

After the old bridge was demolished, crews used hydraulic jacks to "slide" the new bridge into place. The method cut an estimated two months off of construction time and saved nearly $7 million over traditional bridge construction methods. This reduced the impact to the local community during construction as well as creating a wider bridge that allows vehicles and pedestrians to safely cross.