For Conn.-Based Holden Brothers, Two Gravel Pits Prove to Be Better Than One 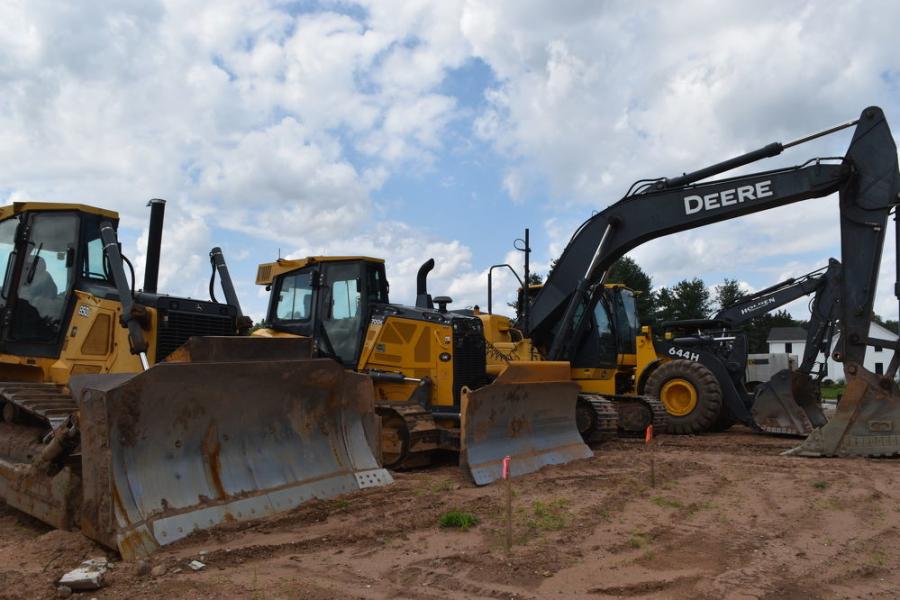 Holden Brothers’ larger end of their equipment fleet congregated at 219 Addison Road, Glastonbury, Conn., where they are doing the site work for the Madison Square medical office complex. The project includes stripping of all structures, trees and topsoil off the old site, the construction of four building pads that are 4,800 sq. ft. each, along with all utilities, drainage, water, sewer, etc.

John Holden started his career working days at the family trucking company. Since 2007, his nights and weekends were spent on outside projects that were too small for the family business to tackle. 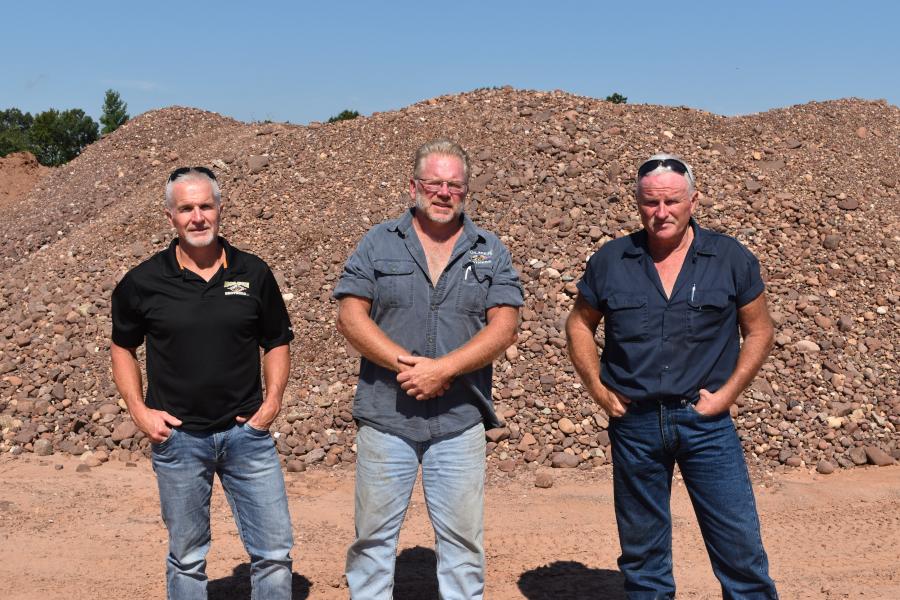 In 2014, Holden made the decision to venture out on his own, and Holden Construction became his full-time venture. Since that time, he has been doing full-time excavating, securing projects such as roadways, parking lots and utility lines and anything excavating-related in northeastern and central Connecticut.

After a few years, he bought a couple of trucks and added trucking to the service offerings. A low-bed trailer was added to the fleet for moving his own equipment and Holden also started doing custom hauling, moving other area contractor's equipment from site to site.

As the company grew, Holden also expanded his fleet of earthmoving equipment to include several excavators, dozers, wheel loaders, skid steers and much support equipment required for site development. With a growing family to feed, he doubled down with hard work and grew the business at every possible opportunity.

A Chance to Expand

In 2015, Holden saw an opportunity to open a gravel pit located at 84 Sadds Mill Road, Ellington, Conn., and expand his operation. This would effectively satisfy two concerns: he would be able to bid more competitively by developing his own source of aggregate and at the same time increase cash flow by selling aggregate to area contractors and municipalities.

He was also aware that his two brothers, Jim and Dave Holden, were still back at the original family business that he left and were looking for an opportunity to move on. Holden offered his brothers the opportunity to form a partnership and operate the aggregate business under the name of Holden Brothers.

The gravel pit opportunity presented itself when the Gale Family Farm, a substantial piece of property that at one time had been a dairy operation, no longer wanted to use their own resources to operate the quarry and approached Holden about taking it over.

The Gale family had over the past several years diversified a portion of the property into a golf course and the remainder was kept for farming and the sand and gravel operation. 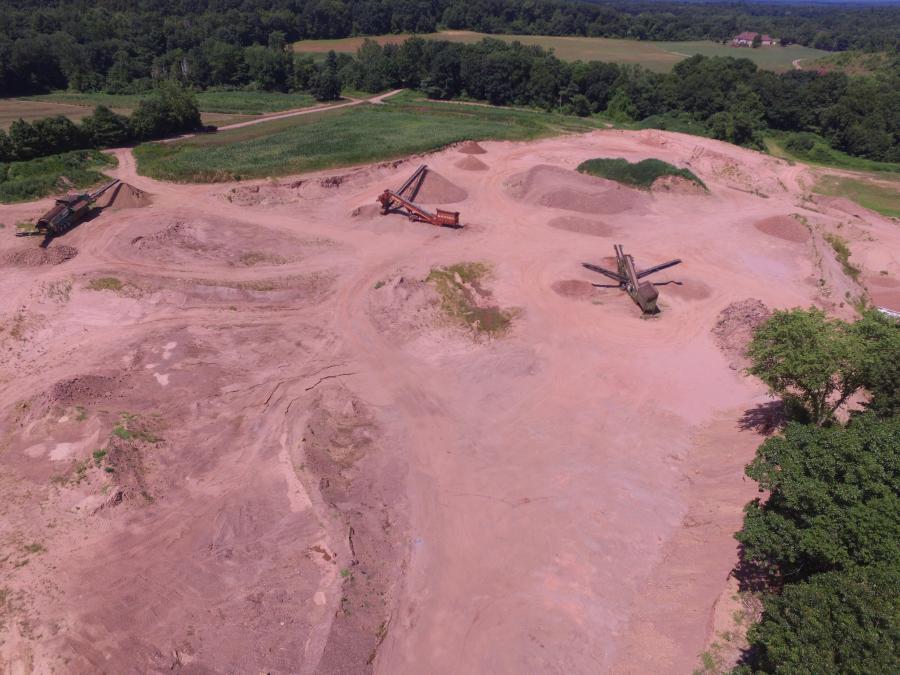 The current site that the Holden brothers have now been mining for the last several years is 23 acres, and they have now been permitted to open a second operation nearby. The pit is currently producing gravel, C33 sand, septic sand, bedding sand, fill, round stone and screened topsoil, using a variety of earthmoving equipment, two flat deck screens and a trommel screen. The Holdens project that there is enough material in the current pit to last a few more years, but they are proactively preparing to start harvesting aggregate from their second operation.

The quarry operation has been a great investment for the Holden brothers: it has allowed John to operate his excavating business more efficiently and brothers Dave and Jim are enjoying the independence of entrepreneurship.

According to Jim Holden, "We have been able to work together effectively as a team. We've had each other's backs ever since we were kids growing up. So, we are used to working together and looking out for each other's best interests.

"We each have our own role within the company, and we typically stay in our own lane. I take care of a lot of the behind-the-scenes activities of the operation such as answering the phones, taking care of the office, and if we're super busy, I will jump into a machine. Dave runs the gravel pits. He makes sure that all of the machines are operating properly, and they are making spec, and he actually operates the machines most of the time."

John Holden's equipment of preference is manufactured by John Deere and sold to him by The W.I. Clark Company.

"I really have been committed to John Deere equipment that we purchase from The W.I. Clark Company right from the start. When I first got started, I felt like [some companies] were laughing at me, sort of like I wasn't big enough to be bothered with. Not so when I met with Greg Hulburt and The W.I. Clark Company. They literally gave me a leg to stand on. 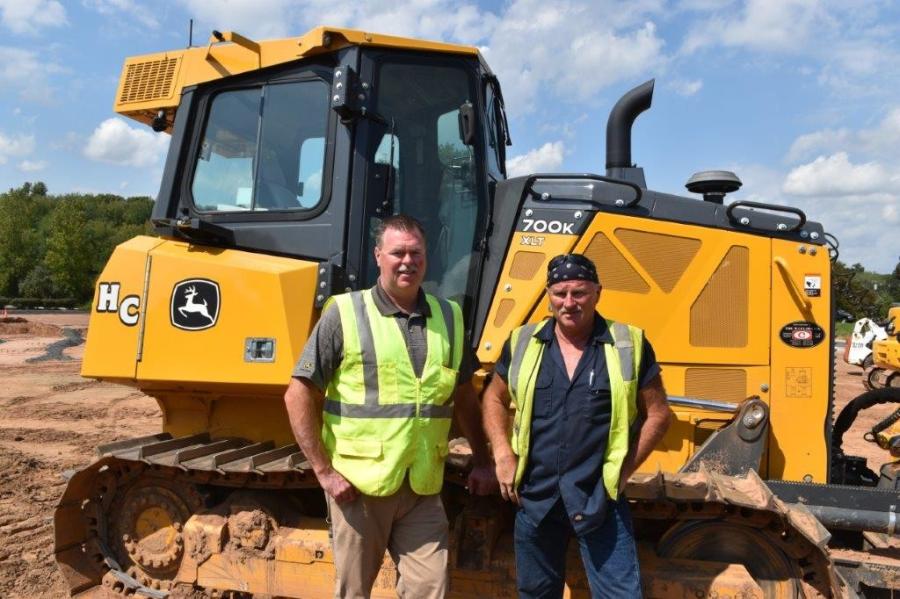 "Greg took an inventory of the type of equipment that I was looking for and searched for good used equipment to get me started. He worked with me to find the best financing options possible."

"The JD 700K is our first venture into GPS technology. I've been watching this technology develop for quite some time and have been discussing it with Greg, trying to determine when would be the right time for our company to make the investment.

"Recently we were doing a road project; the road was two-lane, and we did not have a lot of room to work with. We had 12-feet per side, and we had to keep one side open for cars to get through. Trying to put grade stakes up on the gutter side wasn't too bad but trying to put the grade stakes up on the centerline was terrible. Cars were knocking them down because it was so narrow.

"We came to the realization that if we had the GPS it would have been a cleaner project. If we had been using the GPS technology, we would not have had to use stakes on the centerline at all. Additionally, on that project we came to the conclusion that we would have had lower labor costs and lower material costs because the GPS technology allows you to do a far more exact job of laying of your material and frankly, reduced the stress levels on the project overall.

"When that project was finished, I knew it was time to make a decision, so I got on the phone with Greg and committed to making the purchase."

According to John Holden, when you make this type of purchase the initial investment can be heavy.

"Not as much on the machine side, for the actual dozer we were only paying about 5 percent more. But, when you add the purchase of all of the Topcon support equipment, the price starts to add up a bit. As best we can estimate, we should have a complete return on investment after our first two or three jobs. The reality is our larger competitors are all using this technology and are able to bid more competitively as a result. If the mid-size contractors are going to survive, we have to make the same investment in technology in order to compete."

It's not just the efforts from Greg Hulbert putting together great equipment packages or the advanced technology from John Deere that keeps John Holden committed to John Deere and the W.I. Clark Company. It's also the service. 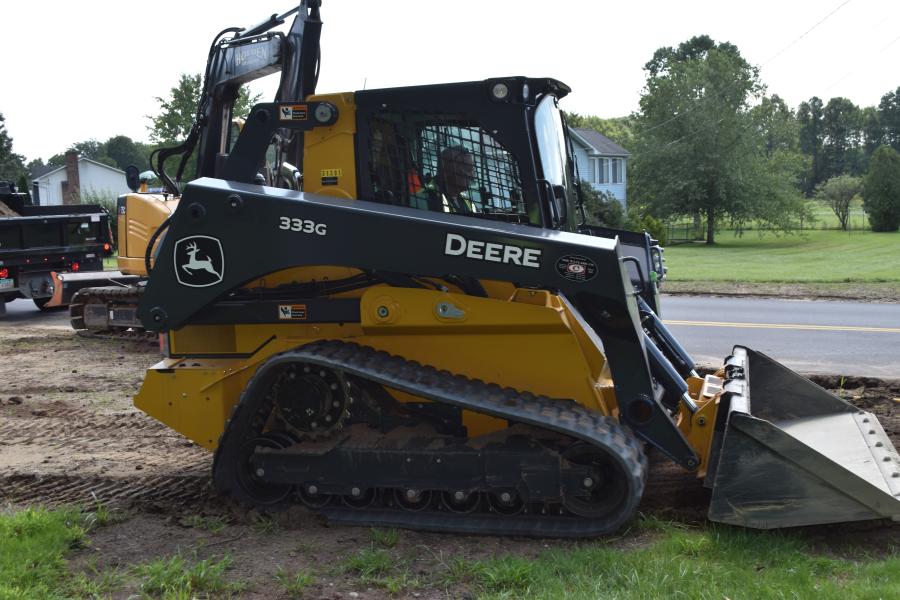 "They are great. Anytime I need them they are there, and their response time is great. I don't need them often but, when I do, they are Johnny on the spot. Parts supply and inventory is great. If by some chance they don't have what I need they have a rush order system that will get the part to me right away and it if turns out to be the wrong part they have never charged me a restocking fee. That's important to me," John said.

Turns out, the admiration is mutual.

"I really enjoy working with these guys," Hurlburt said. "They work closely together as brothers and you're not dealing with a lot of friction, and they are very well respected in this industry and in this town. I enjoy being a part of their business and being friends; our kids even go to school together.

"It makes it a lot easier to work with a customer who is physically out there working on the job. They know what they want, they have experience with equipment, they know how everything comes together to make their business succeed. That's the really cool part of being able to watch three brothers able to do this."

"The John Deere product serves us very well," Holden concluded. "Our mini excavators give us great comfort along with great visibility. We just purchased a John Deere 333 tracked skid steer. That has exceptional visibility.