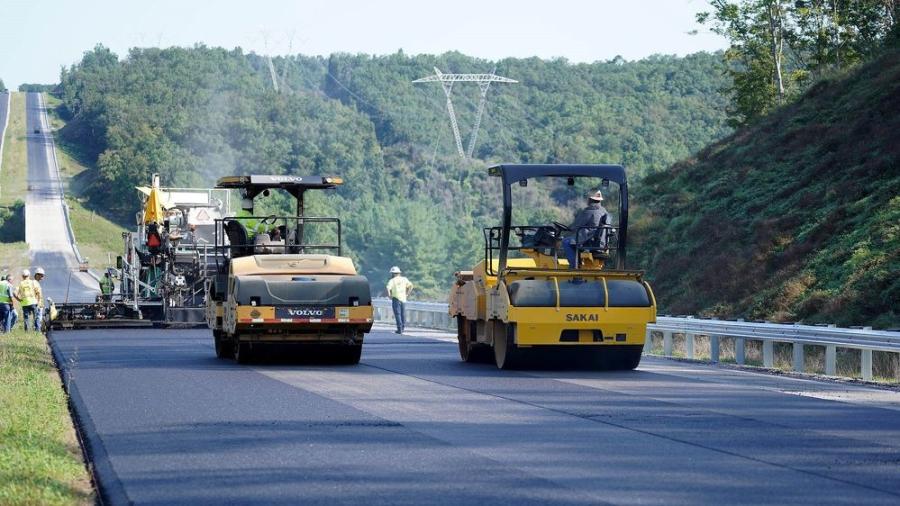 Experienced drivers in the East know that the winding two-lane roads in West Virginia can be a scenic wonder. It's a must to drive some of these roads with the windows down, view the fall colors and listen to John Denver sing "Country Roads." 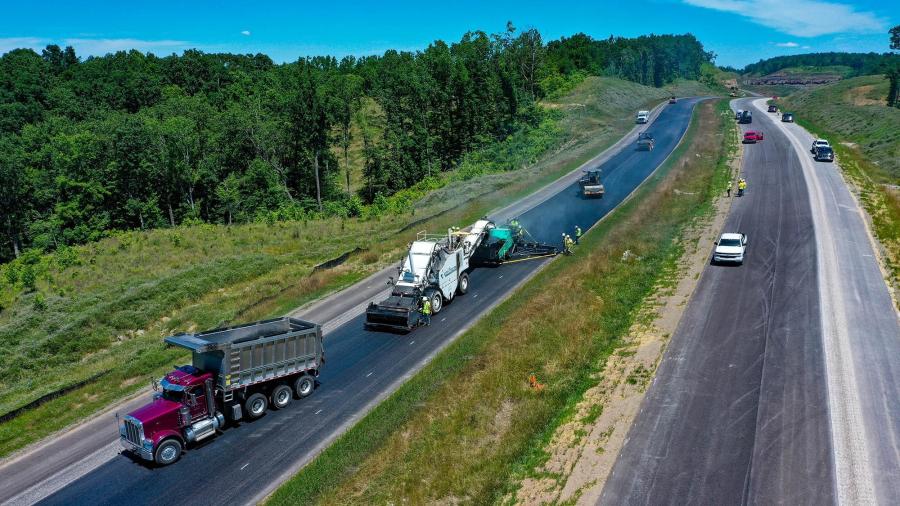 But drivers who need to reach their destinations promptly know that some of these roads can be a teeth-grinding experience.

U.S. 35 between the I-64 intersection and the West Virginia-Ohio state line has qualified for teeth grinding. An average of 19,000 vehicles travels this path daily, nearly a third of it truck traffic.

The driving experience is undergoing a $257 million transformation from a two-lane to a completely new four-lane road. Gov. Jim Justice said, "This is going to make our drivers safer."

Highway officials believe that the new construction will reduce congestion and enable drivers to pass each other more safely than previously on a two-lane highway. Justice also observed that the new highway construction will make day trips to West Virginia more attractive to residents of Ohio cities like Cincinnati, Dayton and Columbus.

Clif Farley, West Virginia DOT, describes the project as the largest single construction project in the history of the state. Workers sliced the tops off many 300-ft.-tall hills, used the dirt to fill up valleys, then built the new four-lane road on top. Bizzack Construction is the prime contractor and has used 28 subcontractors and some 300 people in the work.

Before any road could be built, workers drilled and blasted. Some 16.8 million cu. yds. of dirt were relocated for the project.

"The dirt was a mostly shale and clay," said Farley. "The consistency of the shale was like baby powder. The clay had to be spread out to dry before anything could be built on top."

The new road intersected numerous streams and creeks, requiring more than 7 mi. of pipes to keep the water draining properly. Most of the old U.S. 35 will remain in place and carry local traffic. 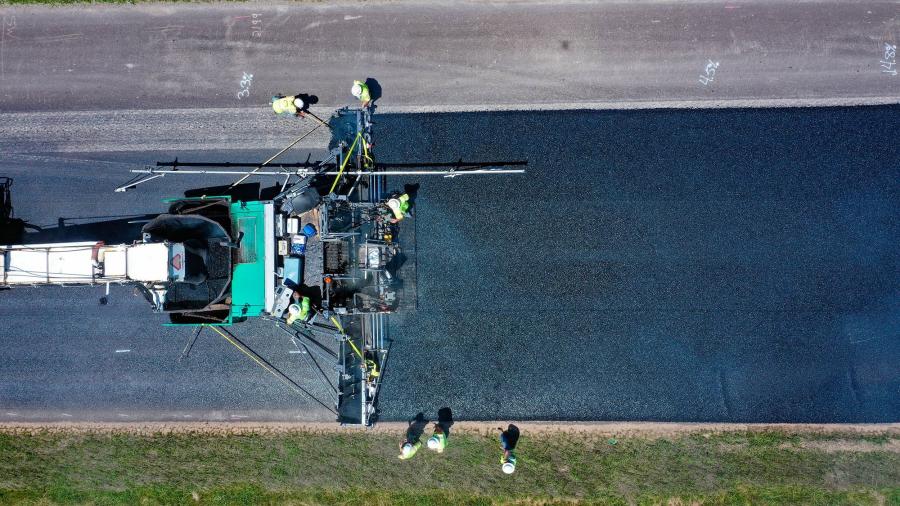 The paving contract for the job is just over $51 million and will require 564,500 tons of asphalt. Once the dirt work was completed, the paving began with West Virginia Paving handling the 14.6-mi. project. The new highway will be a four-lane highway consisting of two 12-ft. driving lanes, a 10-ft. shoulder and 4-ft. shoulder in each direction.

"By West Virginia standards, the new road did not have big gains in elevation," said Bob Brookover, president of West Virginia Paving. "Nor were there any super-elevated curves. Still, there was a lot of effort in building the new lanes. We began with the dirt grade that was left from the previous contract. On average, the dirt grade was left 3 inches high so we would have enough material to build shoulders and median to final grade. Then, we added 6 inches of subgrade stone on top of the dirt grade. We installed an open-graded free-draining base trench throughout the entire length of the project and built one 4-inch lift of free draining base overall the mainline, as well."

Since most of the road work was adjacent to the Kanawha River, owners of West Virginia Paving decided to bring quality aggregate in from Indiana by barge. High water on the river, caused by heavy rains, halted progress for the barges several times. The water level finally subsided, and the barges continued downriver, negotiating three river locks before arriving at the asphalt plant in Poca, W.Va. The plant was just 11 mi. from much of the paving, giving trucks a short trip with fresh asphalt for each day's paving.

For any project of this nature, quality control is important. West Virginia Paving and the West Virginia DOT agreed to use percent within limits (PWL) to confirm that the new road was a quality highway. PWL was originally implemented as a response to the FHWA wanting the DOTs to be more involved with the acceptance of material placed on federally funded jobs. Also, the DOTs wanted to increase the lifespan of the roadways. PWL requires inspectors to cut cores to test the bulk gravity and bond strength between layers. Loose samples are taken to monitor the AC and gradation. All these samples are taken from the roadway the day of placement. 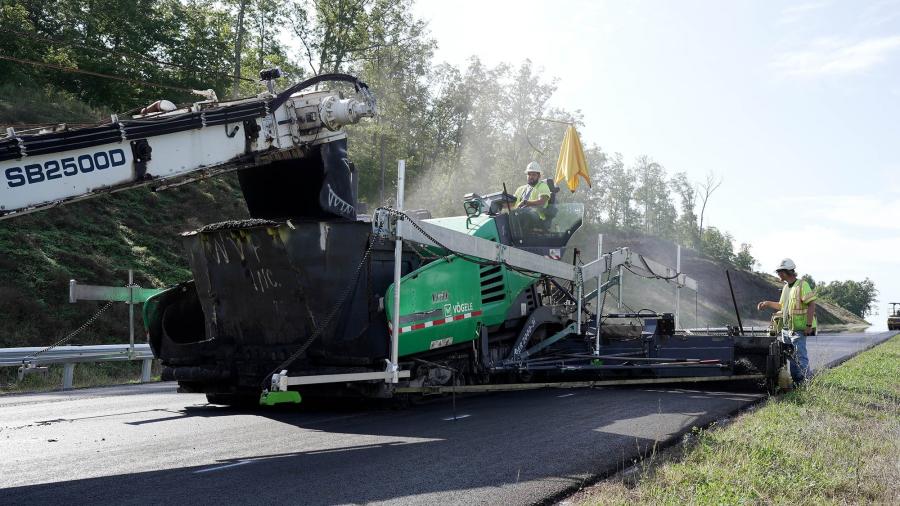 The state DOT allowed the paving team to use 30 percent recycled asphalt pavements (RAP) in two layers of 25 mm, one layer of 19 mm and 15 percent for the top course. This enabled West Virginia Paving the use of a sustainable environmental practice and build a high-performing road. The paving team used a Vogele Super 2000-3 track paver for the paving with a Roadtec Shuttle Buggy as the material transfer vehicle. The team used asphalt rollers from Sakai, Volvo and Caterpillar to finish.

"We were able to do a single pass 28 feet wide with our paver," said Brookover.

This was the first time in the history of the WV Department of Highways that this has ever been done.

"This resulted in no longitudinal joints, which should result in a very durable road and should benefit the DOH's maintenance costs, the taxpayers of WV and the traveling public"

The paving began in June 2019 and should finish this fall. That meant workers had to use masks, be socially distant and wash hands frequently.

"We were careful with these COVID protocols and came through without a single case," said Brookover. "I'm not sure if we were good or just lucky."

Farley has been supervising construction on this section of road for nearly his entire career at the DOT.

"In my mind, this is one of the greatest achievements in highway building in the state," he said. "Not only will we have made this important corridor safer for the traveling public, but we have been able to preserve the scenic beauty that is so important to West Virginia." CEG