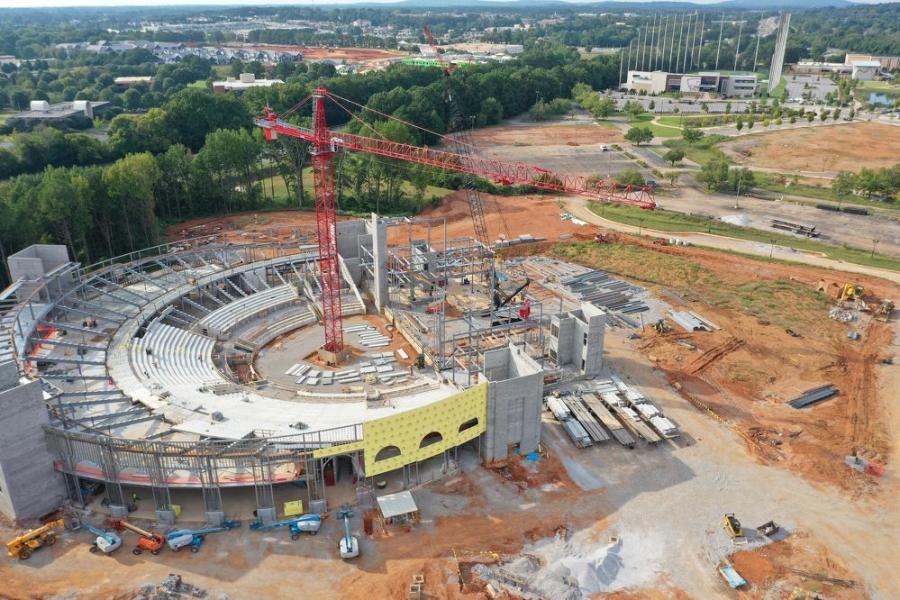 Committed to becoming a cultural pillar within the local community, Huntsville's new 8,000-capacity amphitheater and food village will feature world-class musicians when it opens next year.

Construction is under way on the $45 million structure, which will provide educational events, festivals and the backdrop for local businesses and other organizations wanting to host large-scale gatherings. 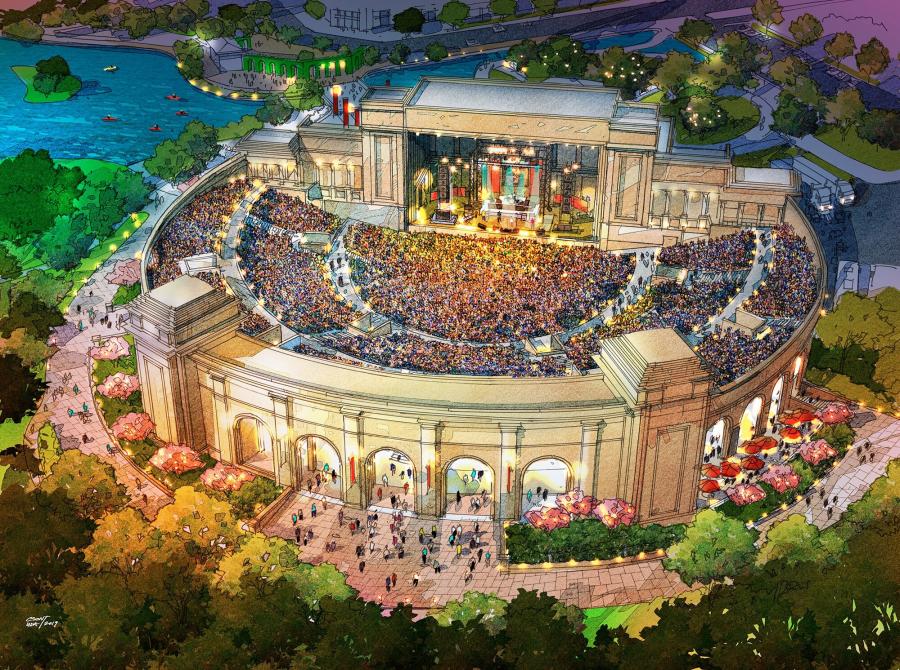 "In 2019, Sound Diplomacy conducted an overall audit of the music infrastructure and support here in Huntsville," said Ryan Murphy, Huntsville venue group president. "One of their major findings and recommendations was for a large amphitheater that would bring in a different level of acts to the area. Our vision was to design, build and operate a world-class amphitheater that not only hosts dozens of amazing touring artists throughout the year, but also a robust program of community events and engagement.

"We will host everything from children's music camps, to film festivals, to farmers markets to graduation ceremonies and so much more. This venue will truly have a life all year long."

With its proximity to Muscle Shoals, the city of Huntsville is a perfect location for the new amphitheater, and the timing to build is ideal.

"The funding was approved and the community needs it," said Murphy. "The overall economic impact is quite extensive, and depending on the number of shows, you can equate a little over $1 million dollars for each event in direct and in-direct impact."

The amphitheater will be primarily composed of steel, concrete and precast concrete, CMU and EIFS. While Romanesque/Greek in its overall style, the structure also is inspired by the most well-known venues in the business, including Red Rocks, Hollywood Bowl, The Greek and Forest Hills. There will be three levels for seating and concourses.

Main construction began in January 2021, and is roughly two-thirds complete. Robins + Morton serves as the general contractor. Murphy said the selection was a good one.

"They were awarded the contract through an RFP process. Their experience, timelines and overall engagement were impressive."

According to Robins + Morton superintendent Jason Bennett, as with many projects, it's taken careful and creative planning to stay on schedule.

"Initial sitework was delayed by a number of rain days, and we have experienced some material delays, but we've been able to navigate around those challenges.

"The structural complexity adds another dimension to the challenge of this project, with its intricate features and round shape. Finally, because of the amphitheater's location near businesses, and the massive size of some of the elements of the structure, we've had to plan carefully for material delivery as to not impact traffic patterns for those who live and work nearby."

Currently, crews are working to set the amphitheater's precast concrete seating, the large stage trusses for the venue's back of house area, interior/exterior CMU, exterior framing and the EIFS within the amphitheater.

Workers also are beginning overhead MEP rough-in activities. Once complete, the amphitheater will take on a nearly-finished look. 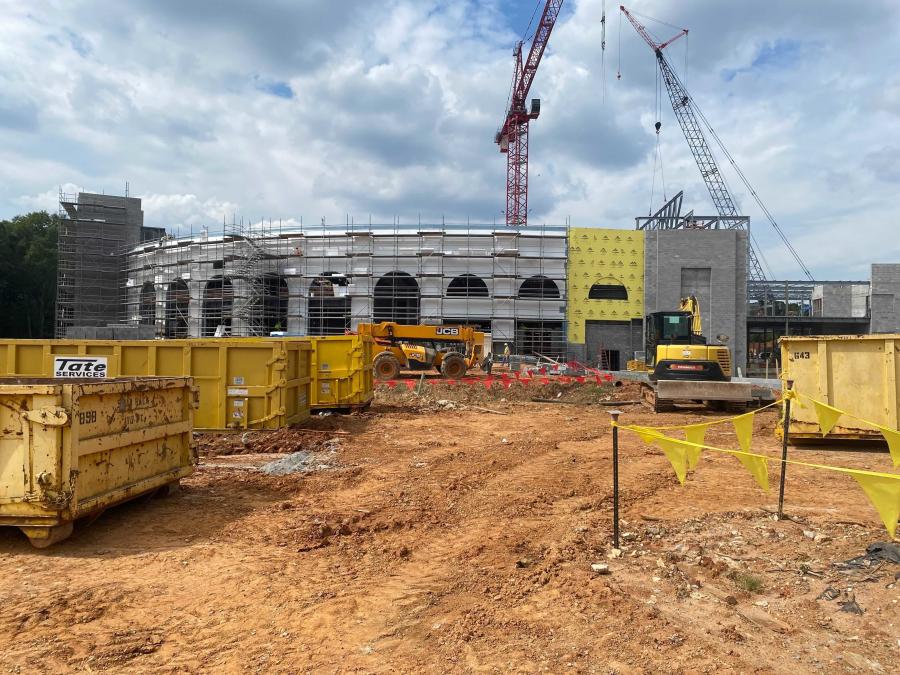 A variety of heavy machinery has been used for sitework and utility work. There are two cranes on site lifting the large materials into place for the amphitheater's structure.

"In addition to the extensive sitework and carefully coordinated support for a structure that can house more than 8,000 people per event, we've recently completed the installation of steel girders that provide the outlines of the amphitheater's ‘bowl,'" said Bennett. "In a couple of weeks, we'll also be finished with the precast seating.

"Before we began work here, Huntsville public works took the lead on preparing the site, giving us a site ready to subgrade when we arrived. The initial work was handled in 2020, so our role began in early 2021 when we were ready to begin preparing for foundations."

Now that raker beams are up and crews are continuing work on the structural elements, they are preparing to complete some of the more cosmetic elements and the interior finishes soon. The final steps before opening will be connecting permanent power and installing the elevators.

The project was on a greenfield site, so no demolition was required. Excavation was especially challenging, as the building's footings are different heights to support the structure at varying elevations.

"Robins + Morton worked with a third-party geotechnical firm to inspect the footing installations, ensuring they were the ideal support for the site's engineered fill," said Bennett. "The most important, and difficult, part of this process was establishing a clear flow of work with our team, the concrete trades, sitework trades and the geotechnical firm.

"With a little more than a year to complete the entire facility, there hasn't been a specific phase that has been much longer than the others. However, completing all the structural elements has been our longest phase to date. Exterior framing and finishes will also consume a significant amount of time."

As for construction milestones, said Bennett, "After breaking ground early this year, we are looking forward to topping out the amphitheater's structure in mid-October. Around the same time, we'll be completing precast. After the first of the year, we'll officially dry in the building and look toward our final two milestones of connecting permanent power and installing elevators in the spring.

"Our entire project team has challenged themselves to bring Huntsville the most impressive venue possible that will attract big names in entertainment and increase tourism to the area. We've all worked hard to deliver something that our community can be proud of, but truly none of this would be possible without the dedication of our trade and craft workforce. We're grateful for their partnership, and recognize the critical nature of their role, in bringing this to life."

Huntsville Mayor Tommy Battle said the completed project will serve as both a quality-of-life amenity and an economic driver.

"It helps Huntsville better position itself to be a premier destination for not only music fans, but also entertainers wanting to perform in a world-class amphitheater. The project aligns with the Mayor's Music Initiative. The amphitheater is a key piece of the city's growing MidCity District, a mixed-use project combining entertainment options with commercial and residential development."

As for the financial impact, Battle said, "RCP Companies, the developer of MidCity District, believes the amphitheater could generate as much as $4.8 million from ticket sales alone in the first year. We believe concert-goers will likely eat/drink at establishments adjacent to the venue before or after a show, so revenues could be much higher. When you talk about long-term impact, the amphitheater and MidCity District have brought a renewed interest to the corridor, and that will continue to bring new commercial and residential development.

"The amphitheater will become a special place for performers of all genres, because there's truly no bad seat in the house. The design is one that promotes intimacy between performer and audience. If performers and fans have a positive experience, we believe they will tell other performers and fans."

"This is a unique project, not just for the city of Huntsville, but for all Tennessee Valley residents. The amphitheater is being built here, but it will draw fans both regionally and nationally. This project will make Huntsville a top concert draw for performers and fans when it opens in late spring or early summer 2022."