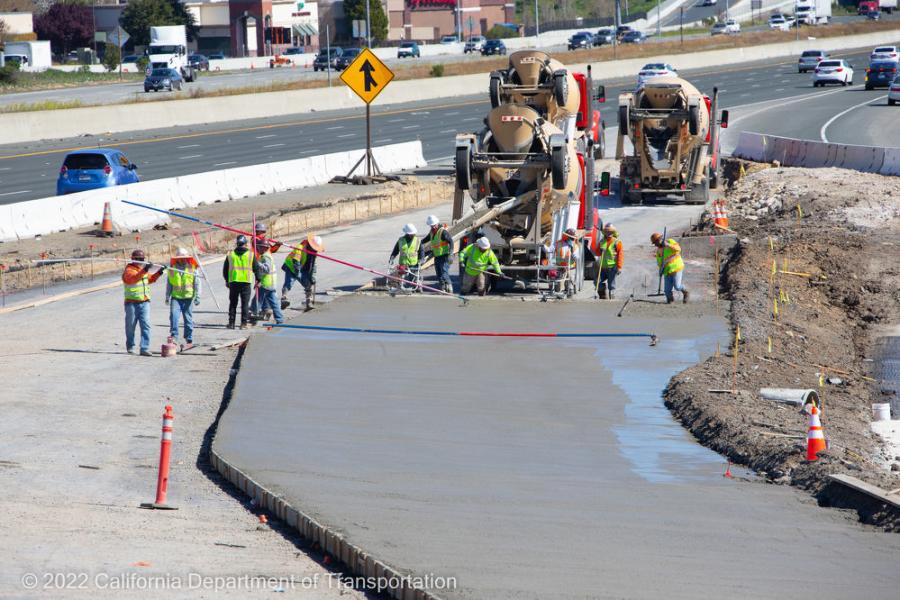 For bridge construction, structure excavation for the abutment and bent footings were first orders of work to allow pile driving and subsequent concrete footing work to proceed. (Caltrans photo)

Kiewit Infrastructure West Co. started work on the California Department of Transportation (Caltrans) and the Solano Transportation Authority's (STA) $93.7 million Interstate 80, Interstate 680 and State Route 12 Interchange Project 2A in August 2020 — an initiative that is improving and widening the eastbound SR 12 to EB I-80 connector in the I-80 corridor, as well as improving the connectivity between regionally significant destinations.

This portion of the project is expected to be completed in Fall 2022.

What Crews Have Completed

"Coordinating logistics with live traffic on Highway 12, I-80 and associated connectors and ramps is challenging," said Brandon Risso, Kiewit's project manager. "We plan our operations with the safety of our workers and the traveling public foremost in mind. We implement lane and road closures as needed to safely execute specific work. We do so carefully to ensure we comply with specified restrictions on closure hours. Balancing safety and needs of the traveling public requires planning, communication and coordination with our client."

"Although not in use currently, much of our roadway excavation and embankment work was completed with a Cat 623 elevating scraper," said Risso.

Excavation and demolition operations should generate a large amount of steel, asphalt and concrete. 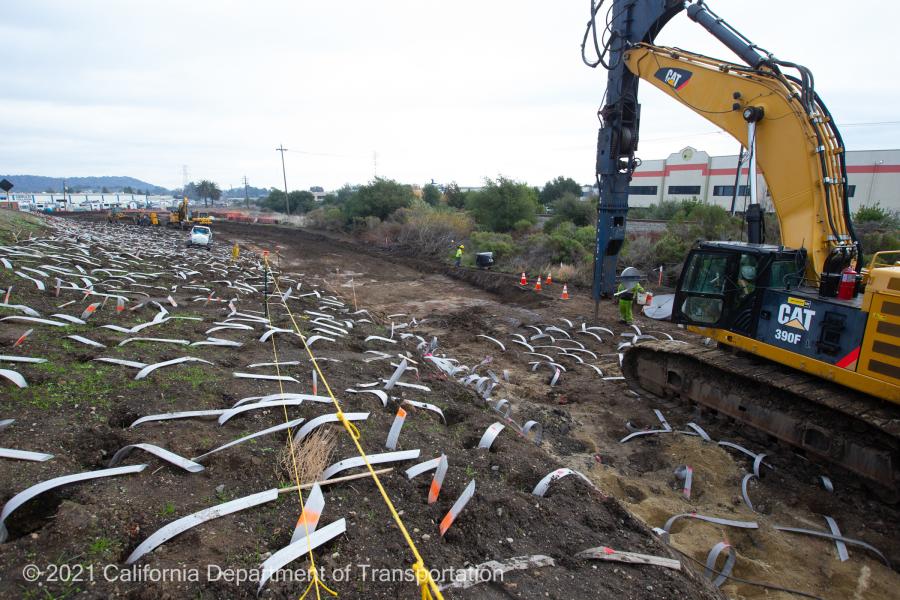 "The project will balance, from an earthwork standpoint, all excavated material being reused on-site," said Risso. "Major demolition operations resulted in more than 250 tons of concrete, 150 tons of steel and 9,000 tons of asphalt, all of which was sent off-site to recycling or reuse."

The construction of the new two-lane bridge over I-80 connecting Hwy 12 was constructed in the first stage of the project.

"The bridge construction was on the critical path of the project schedule and was one of the early top priorities," said Risso. "Structure excavation for the abutment and bent footings were first orders of work to allow pile driving and subsequent concrete footing work to proceed. From there, abutments and bent columns were constructed, followed by falsework and the bridge superstructure. The completion of the bridge was critical to the first stage of construction as the second stage relied on shifting traffic off the existing bridge and onto the new bridge. Once the bridge was completed and traffic was switched, the existing bridge had to be demolished."

The challenges were constant, but solutions were found. During construction of the new bridge, grading and drainage crews had significant work to complete on the roadways connecting to either side of the bridge, according to Risso.

"Crews had limited space to work, constrained by the existing Hwy 12 on one side and an active railroad track on the other, so planning access and coordinating daily activities between the bridge crews and the roadway crews was challenging at times to ensure that crews could safely progress their work," he said.

"The demolition of the existing bridge also presented unique challenges as the superstructure of this 400-foot long bridge was required to be demolished in a 10-hour window during a single full closure of EB & WB I-80," he added. "Significant planning and engineering went into the planning and execution of the bridge demolition to ensure it was demolished safely and in a controlled manner."

The new connector bridge is a cast-in-place box girder structure that is two lanes in width and 500-ft. in length.

The new slip ramp from EB Hwy 12 to Green Valley Road was constructed simultaneously with the new EB Hwy 12 to EB I-80 connector bridge.

"The connector ramp coming off the new bridge required more than 40 feet of embankment to align with the new bridge structure," said Risso. "Due to the proximity of the existing railroad, this connector embankment was constructed utilizing a permanent MSE wall, spanning 690 linear feet. The MSE wall was built on previously undeveloped land that geotechnical engineering determined to be subject to settlement due to the new loads associated with the volume of embankment material, so prior to building the MSE wall over 600,000 linear feet of prefabricated vertical drains [wick drains] were driven into the underlying soils to accelerate the compression and consolidation of the subsurface material and allow the anticipated settlement to occur during the MSE wall construction.

"The MSE wall was constructed in prescribed stages, limiting the volume of embankment fill over time to allow the settlement to occur in a controlled manner.," he added. "Caltrans geotechnical engineers monitored the settlement using settlement cells and vibrating wire piezometers to track actual settlement vs. modeled settlement." 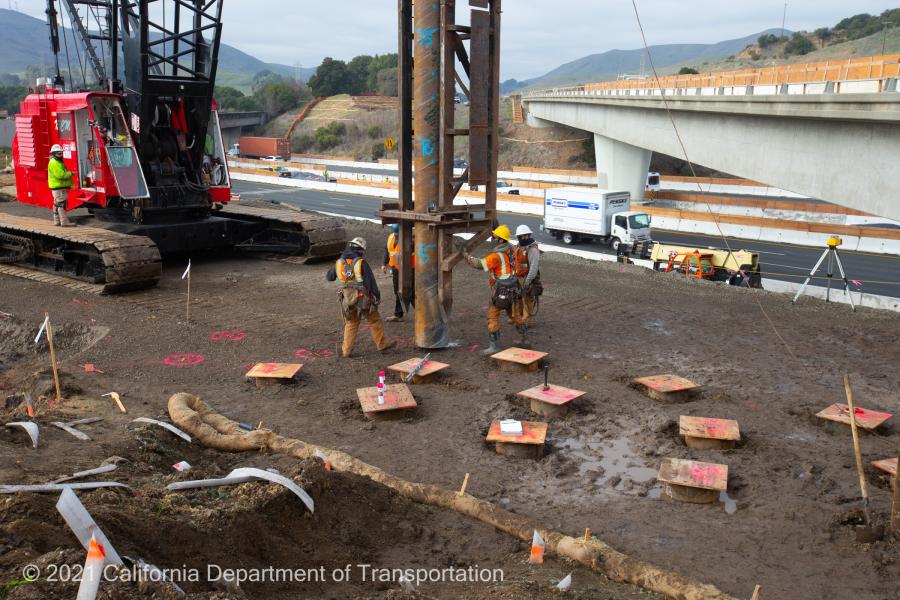 "Besides the jack and bore, all remaining storm drain culverts are being installed via traditional ELB [excavate/lay/backfill] methods," said Risso. "There have not been major challenges associated with the drainage work, although much of it is deep and requires conventional shoring methods."

During the first stage of the job, peak days had approximately 40-to-50 Kiewit and subcontractor crafts-people on-site. During the current phase peak days are closer to 20. Kiewit is using local and regional subcontractors and suppliers.

Maintenance is crucial to keep the equipment operating efficiently.

"Our equipment department, managed by Frank Medina, is very diligent about ensuring preventative maintenance services are performed at appropriate utilization hour intervals which helps reduce the need for unplanned wear and tear issues and keeps the equipment running efficiently without impacting operations," said Risso. "Preventative maintenance on equipment is scheduled with the job team so that it can be performed at times and days that are least impactful to the project. The close proximity of the project to the equipment yard allows for a fuel and lube truck to service the job from the yard in the mornings prior to shift), eliminating the need for on-site storage of hazardous materials such as fuels and oils." CEG