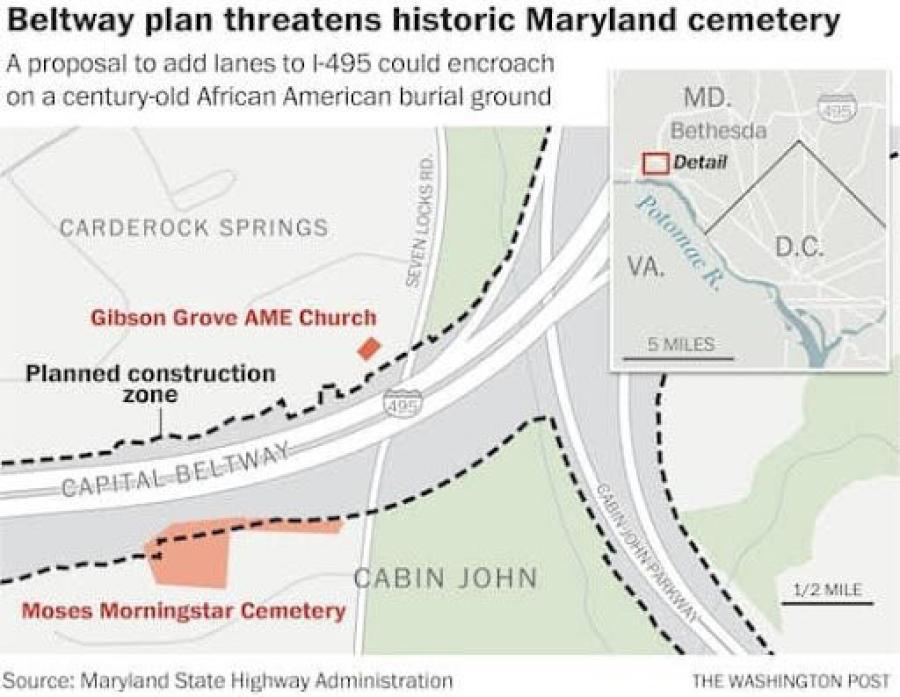 The potential for graves atop a grassy embankment along the Beltway’s Inner Loop prompted state officials to shift the project’s “limits of disturbance” to spare the area, said Julie M. Schablitsky, chief archaeologist of the Maryland Department of Transportation. (Maryland State Highway Administration map)

Maryland highway officials committed to avoid a historical African American cemetery when adding toll lanes to the Capital Beltway after 27 "probable" or "possible" unmarked graves were detected along the highway this summer, a state archaeologist said Sept. 9.

The potential for graves atop a grassy embankment along the Beltway's Inner Loop prompted state officials to shift the project's "limits of disturbance" to spare the area, said Julie M. Schablitsky, chief archaeologist of the Maryland Department of Transportation (MDOT).

The gravesites are on the highway side of a chain-link fence between the Beltway and Moses Morningstar Cemetery in Cabin John, northwest of Washington.

"We don't know with 100 percent certainty that's what they are," Schablitsky told the Washington Post. "But the patterns give enough indication that it's probably a cemetery area, and we need to avoid it."

An additional 189 probable burials and 188 possible graves, most of them unmarked, were detected by ground penetrating radar within the cemetery's boundaries, according to an archaeological consultant's report. That was about 300 more than local historians and descendants had previously chronicled dating to the early 1890s.

The outer edges of the highway construction site will be about 5 ft. from the closest area where radar found a possible burial, a project spokesperson said. Previous plans had showed the Beltway expanding into the grassy area and about one-fifth of the 1.5-acre cemetery.

Highway Cut Through Many Black Communities

Moses Morningstar Cemetery and its church were separated when the Beltway sliced through the historical African American community of Gibson Grove, as highways did in other Black neighborhoods in the 1960s — a racial injustice that President Biden has said needs to be corrected.

"We own the faults of the Maryland Roads Commission impacting this community 60 years ago," Schablitsky said to a Post reporter accompanying her on a recent visit to the cemetery. "It's our responsibility now to repair that damage and come in and do the right thing."

The cemetery's fate has been a focal point for opponents of Gov. Larry Hogan's plan to relieve traffic congestion by adding toll lanes to part of the Beltway and Interstate 270. Critics have said widening the highways would cause too much damage to adjacent parkland, long-standing neighborhoods and historical sites.

Those who advocated for the cemetery's protection said they did not want history to repeat itself by the Beltway once again destroying a sacred space. Several descendants of people buried there were relieved to hear that the small, wooded graveyard off Seven Locks Road would be spared.

"The state highway department needs to stay as far away from there as they can possibly stay," said Montgomery Crawford, a Waldorf resident who has been searching for his grandfather's unmarked grave. "This is a sacred, historic place. This area needs to be left totally alone."

Diane Baxter, a D.C. citizen who has yet to find her great-grandparents' graves, said she was "terrifically surprised" by the radar findings. She told the newspaper that she has long believed the cemetery extended beyond the chain-link fence bordering the Beltway.

"Now the task is to figure out who they are," Baxter noted, adding that she also wants to see detailed maps or roadside markings indicating the cemetery will be spared.

"I have to see the documentation that they're going to avoid it," she said to the Washington news source. "I'm hopeful, but I can't jump up for joy yet."

The Post reported that historians have documented at least 80 people buried there between 1894 and 1977. They include Emma Jones, the longtime housekeeper for American Red Cross founder Clara Barton, and Sarah Gibson, the community's founder who had previously been enslaved in Virginia.

Most of the graves are invisible to the naked eye or revealed only as sunken rectangular shapes. Chunks of concrete and large field stones lie about — a common marker for people who could not afford headstones, according to archaeologists.

Schablitsky said there are no records showing burials beneath the Beltway or that any graves were moved or destroyed during its construction.

But Crawford said he believes it is a possibility because he has long suspected the property line between the highway right of way and cemetery is in the wrong place.

"With that many gravesites out there" atop the Beltway's grassy embankment, he said, "someone should have known something."

Schablitsky said federal and state laws passed since the Beltway's construction require MDOT to consider the potential impact of new roads on historical cemeteries, buildings, bridges and other structures.

The state determined Moses Morningstar Cemetery to be historically significant because of its late 19th-century role in Cabin John's African American community. The land is owned by a chapter of the Order of Moses, a post-Civil War benevolent society throughout the Mid-Atlantic that provided financial help, burials, and social support to African Americans during segregation, according to historians. Remnants of the stone foundation for Moses Hall, a small lodge where members met, also remain amid the graves.

In its article, the Post said that Illinois archaeologist Tim Horsley noted that his ground-penetrating radar can locate changes in the soil, including grave fill, and air pockets, such as inside a casket.

Whether human remains are buried in all the areas where he found "anomalies" would require "more intrusive archaeological methods," he wrote in his recent report. However, he said, most of the anomalies appeared in adjacent rows. The total of 377 probable or possible burials in the cemetery is probably artificially low, Horsley noted, because his equipment could not reach the entire cemetery.

The radar found one probable grave and three possible burial sites on the grounds of the former Gibson Grove A.M.E. Zion Church, which still stands on the other side of the Beltway. It is now home to First Agape A.M.E. Zion Church but has been vacant since a fire gutted the building in 2004.

But Schablitsky said all those gravesites are "way outside" the Beltway widening's planned construction zone.

The Rev. Edgar Bankhead, of First Agape, said he has been told part of the church's land will be used to store and move heavy equipment during construction. But he is looking forward to storm water improvements and a new sidewalk connection to the cemetery that he said he has been told will come with the highway project.

"They're going to make it right, the way it should've been done," he told the Post.

Bankhead said family members of those thought to be buried in the graves want them moved to Moses Morningstar Cemetery.

Schablitsky said the state will continue its efforts to work with the descendants on ways to commemorate the site, such as by erecting signage about its history or including the names of people buried there on a proposed sound wall.

"To be honest, the beauty of this entire project is history not repeating itself," she explained to the Washington news source. "This is a win for us — it continues to show us the value and importance of communities coming to the table and sharing their concerns. This is exactly how we want things to turn out."