MassDOT Plans $1.7B Overhaul of Turnpike Infrastructure in Allston 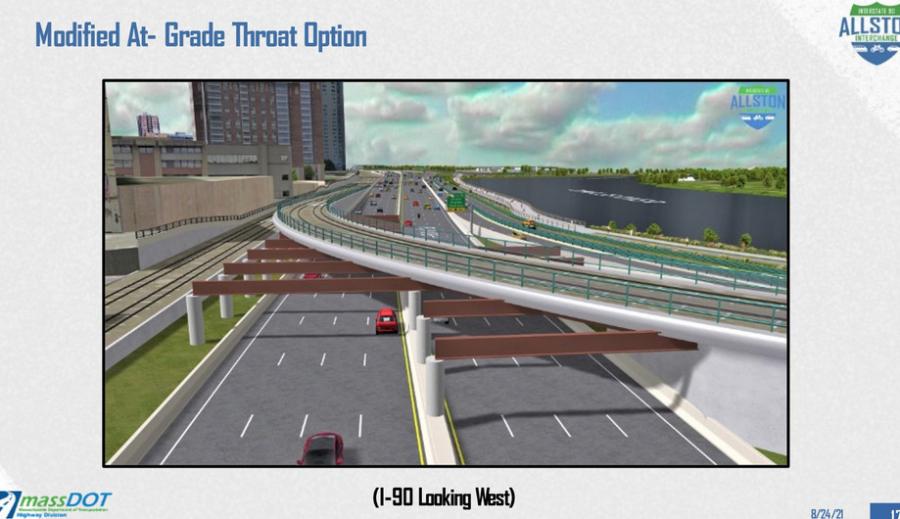 After 10 years of discussions, Massachusetts Gov. Charlie Baker and his administration have embraced a design for a once-in-a-generation, $1.7 billion infrastructure overhaul of the state's turnpike by the Charles River in the Boston's Allston neighborhood.

Revealed on Sept. 29, the plan would replace an aging highway viaduct by aligning train, highway and pedestrian infrastructure at the same elevation without pushing roadways onto the riverbank. That could potentially mean that four rail tracks, eight lanes of the Massachusetts Turnpike, four lanes of Soldiers Field Road and a pedestrian boardwalk over the Charles, would be built side-by-side.

Boston-area community groups and transportation advocates have long favored that option, pitching it as the best way to balance the various modes of transportation that converge on a narrow stretch of land between Boston University and the river.

MassDOT touts the project's additional benefits, such as a straighter turnpike alignment that will make driving conditions safer, a wider Paul Dudley White Path for bicyclists and pedestrians, and an "improved gateway into the city."

"It took hard work, and hard work pays off, because what we ended up with is something that's far better for the city, the region and the state than having to replicate 1960s highway design and having to be stuck with an elevated structure in that part of the city," commented Rick Dimino, president of the A Better City business group involved in the project's discussions.

But MassDOT Highway Administrator Jonathan Gulliver said his agency's support for the at-grade option means engineers will not need to "simultaneously design three different options to answer one question."

"This really clears the deck for our engineering team to focus their resources on advancing this particular project," Gulliver told SHNS. "Now we can focus on advancing this design. We have high confidence it's going to make it through the permitting process, that it will be the preferred alternative when we get to the appropriate stage, and that we can now focus our resources on where they're needed."

Earlier versions of the at-grade alternative called for placing Soldiers Field Road 4 ft. into the riverbank because of the space limitations in the area, drawing significant pushback from environmental advocates and community leaders.

The updated design slices a bit of land off several other infrastructure pieces to make up those 4 ft., Gulliver explained, meaning it would no longer require any roadway in the river's territory either permanently or temporarily during construction.

Dimino, whose group sits on a task force advising MassDOT on the project, said advocates worked over the past year to prove that the highway did not need to bleed into the river.

"The only thing that will be in relation to the river relative to this project will be what we hope to be the frosting on the cake, which is re-establishing a beautiful, livable river's edge," he said to SHNS. "Now, we're all in agreement that we can pursue these types of opportunities."

Current estimates peg the total project price at $1.7 billion and a building timeline of eight to 10 years. Gulliver said both figures could change because MassDOT remains at a "very preliminary stage of design."

It also is not yet clear how Massachusetts will finance the full project.

Gulliver said he expects the city of Boston, landowner Harvard University, and other stakeholders to contribute. The state also will use toll revenue from the Massachusetts Turnpike, though it will not increase tolls beyond existing levels, he noted.

Federal funding also will play a significant role, and Gulliver said MassDOT officials are "closely watching what's happening in Washington" as the U.S. House prepares to vote on a $1 trillion infrastructure bill.

Once construction begins, it will almost certainly create major headaches for commuters.

Consensus on the single-elevation layout comes after a decade of deliberations about repairing or replacing the aging viaduct that today carries the turnpike through the "throat" stretch of Allston.

During that time, Dimino said his group and MassDOT officials had been "in the trenches" together.

In May, the transportation agency announced it would accelerate $75 million in viaduct repairs.

Gulliver told SHNS that work on "a piece of infrastructure that's really big and heavily used and is at the end of its life" should take place in 2022, even as MassDOT works to advance a design that would eliminate the raised highway section altogether.

"In every scenario that we've mapped out — [utilizing] all three alternatives that are currently on the books — the viaduct stays in place for a large part of construction," he said. "It needs to be in service throughout those 10 years, at least."