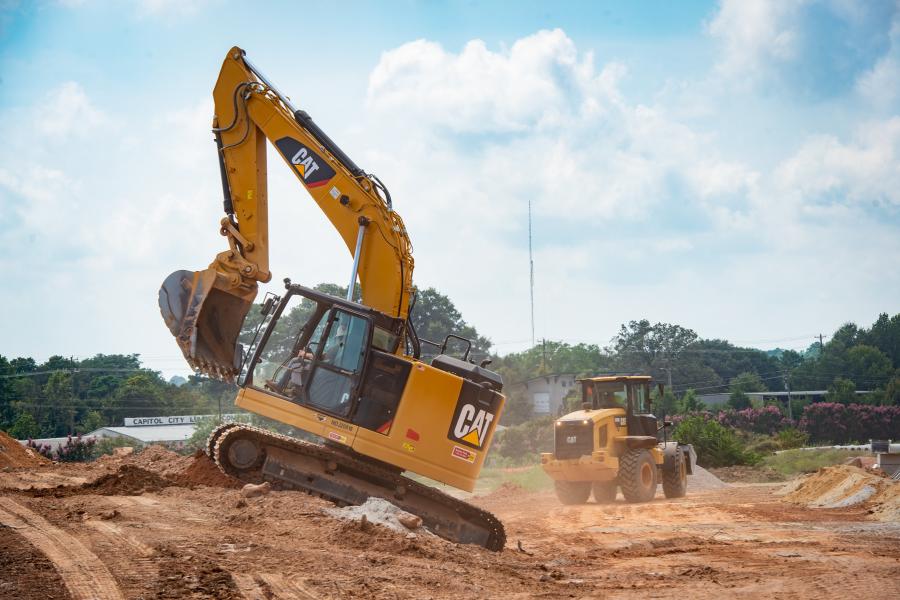 Lane Construction serves as the general contractor on NCDOT’s I-440 project. The company is praised for its local project knowledge, past working relationships and extensive design-build experience. (NCDOT photo)

The North Carolina Department of Transportation (NCDOT) is overseeing a $365 million undertaking known as the I-440 and Blue Ridge Road project. The improvements to I-440, between just south of Walnut Street in Cary and north of Wade Avenue in Raleigh, are being made to improve traffic flow, access and efficiency.

"This segment of I-440 has four lanes and forms a bottleneck between the six through lanes at both ends, causing congestion, which is forecast to increase," said NCDOT resident engineer Chad Hinnant. "In addition to high traffic volumes creating congestion, the project corridor experiences above average rates of crashes. 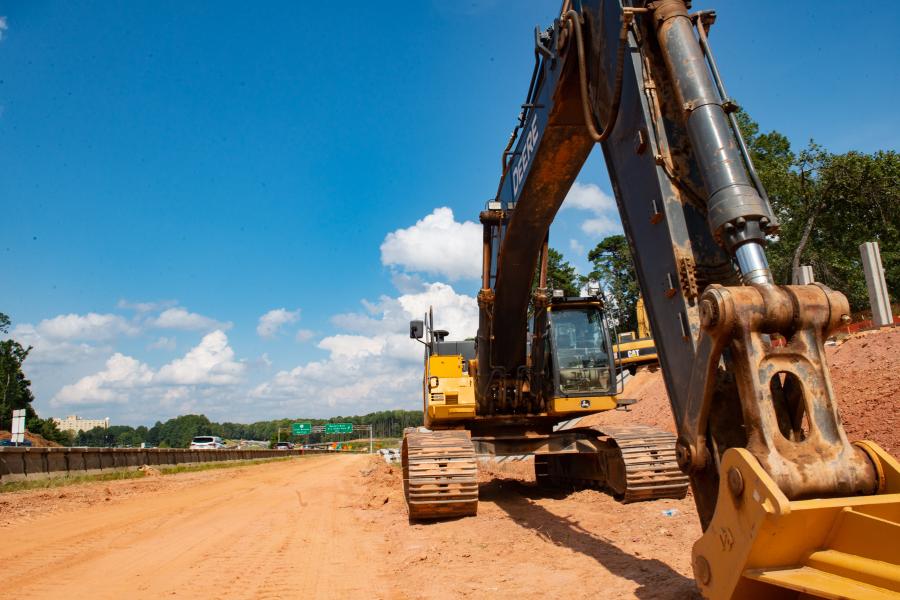 "Built in the 1960s, it also is the oldest section of I-440, and needs rehabilitation. The roadway and interchanges have substandard design elements, such as poor sight lines, narrow shoulders and medians and short acceleration and deceleration lanes."

The widening of I-440 will coincide with lowering the grade of Blue Ridge Road and constructing new bridges for Hillsborough Street (N.C. 54), Norfolk Southern Railway/North Carolina Railroad/CSX Transportation and Beryl Road to reduce congestion and train-related conflicts with vehicles and pedestrians. A new connector road will link Blue Ridge and Hillsborough.

According to Hinnant, now is a good time to perform the work.

"I-440/U.S. 1-64 is an important link in the region's transportation network. It provides access from the region to numerous major destinations near the project corridor that generate high volumes of traffic, either daily or during special events. In addition, I-440 in the project study area was constructed more than 50 years ago, and is the oldest section of the Raleigh Beltline.

"The roadway and interchanges in this section of I-440 have substandard design elements such as poor sight lines, narrow shoulders and medians and short acceleration/deceleration lanes. Also, due to the age of the facility, the pavement, structures and interchanges need rehabilitation."

As with most road projects, drivers are having to make some adjustments. NCDOT has taken steps to assist motorists during the construction.

"There is extensive use of positive protection and several mainline shifts and temporary ramps being used to maintain interchange movements. Multi-haul operations are occurring at night and during off-peak hours.

"There has been coordination with emergency service providers, Wake County Public Schools, Triangle Transit, Capital Area Transit and others, as necessary, during construction regarding access changes and detours. Also, there has been specific coordination with the NC State Fair, PNC Arena, Meredith College and North Carolina State University regarding the project construction schedule." 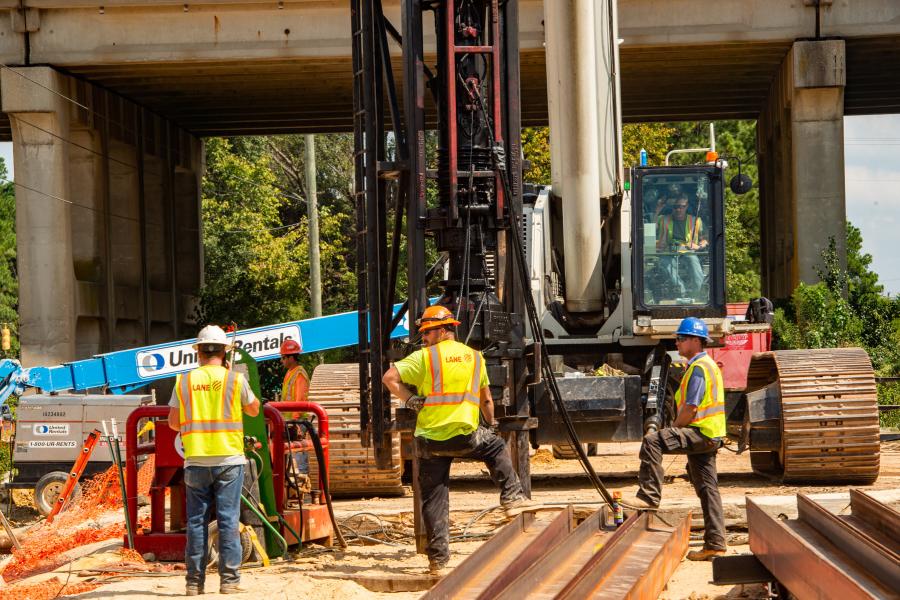 Lane Construction serves as the general contractor, which Hinnant praised for its local project knowledge, past working relationships and extensive design-build experience. For crews, the biggest overall challenges have involved significant utility relocations and right-of-way acquisition, which drive the phasing of the project.

Tasks include grading; storm drainage; the building of noise walls and retaining walls; water and sewer; utility relocation; and bridge construction. Crews have already completed replacing the Melbourne Road bridge over I-440.

The job site before work began was a four-lane divided highway. Preparation of the site involved clearing and grubbing the perimeter of the project and installation of erosion control measures.

There are a total of 14 bridges tied to the project. All existing bridges will be replaced, and the pavement structure will be rehabilitated. Eight bridges along the corridor will need to be demolished and rebuilt to facilitate the widening of I-440.

Upgrading interchanges requires a multi-phased maintenance of traffic (MOT) approach, as well as the use of retaining walls to minimize right-of-way impacts.

Hinnant said, to date, the elements have not been a major issue.

"Barring a tropical storm or hurricane, weather should not impact the project schedule. However, with several ramp closures, the opening may be delayed if weather does not cooperate."

To keep crews and drivers safe during construction, there is extensive use of positive protection and multi-haul operations occurring at night and during off-peak hours. 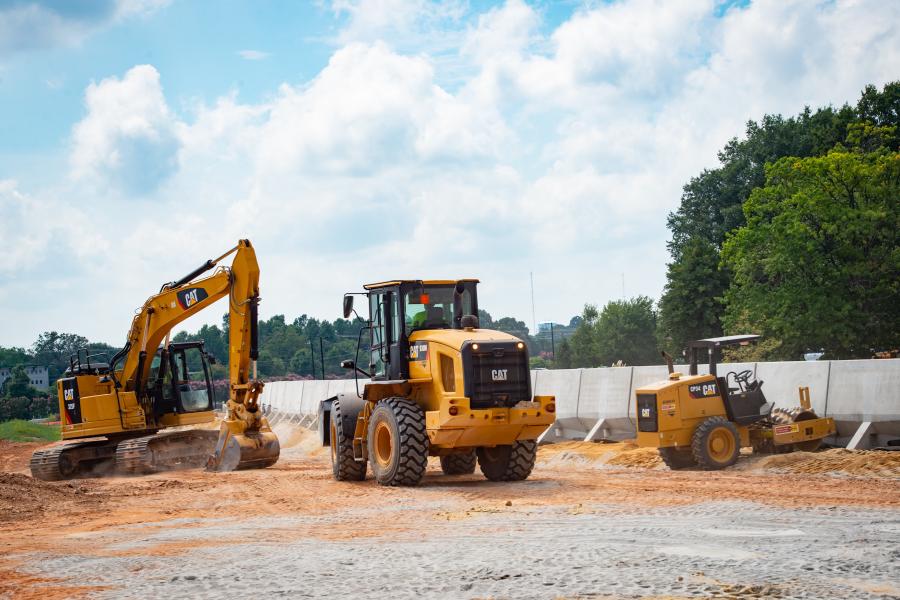 A variety of heavy equipment is being used on the job, including Caterpillar D5 and D6 dozers; Caterpillar 138, 308 and 450 excavators; and a Link-Belt telescoping crane. The machinery is being used to create the infrastructure (structures and roadway) for the facility. Main materials include earth, concrete and asphalt.

A total of 700 cu. yds. of excavation will be moved during construction, along with 500 cu. yds. of borrow and 1.2 million cu. yds. of fill material. The project is broken down into many phases, and movement of material is very limited in each phase.

Due to the spacing of the existing interchanges coupled with maintenance of traffic requirements, there are many phases, with earthwork/structure components necessary at each step.

NCDOT, in cooperation with the Federal Highway Administration, completed an environmental assessment of the proposed improvements to I-440 in 2017. A pre-construction open house took place in 2019. Project team members and representatives of the Lane Construction design-build team were available to discuss the project and answer questions regarding the project.

The current estimated completion date currently is late 2024 to early 2025. The goal is to have traffic in its final pattern in mid-2024. CEG