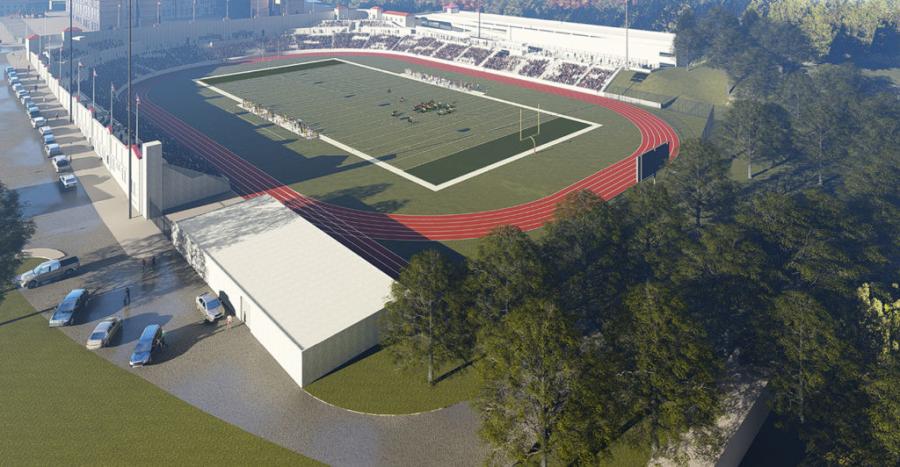 The $94-million financing for the redevelopment of Hinchliffe Stadium, a former Negro Leagues ballpark in Paterson, NJ, has been finalized by BAW Development, paving the way for work to continue. (BAW rendering)

Financing has been finalized to redevelop Hinchliffe Stadium, a former Negro Leagues baseball park in Paterson, N.J., clearing the way for work to continue the $94 million project.

One of only four remaining Negro Leagues ballparks still standing, Hinchliffe Stadium opened in 1932 and was home to, at various times, the New York Black Yankees and New York Cubans during the ‘30s and ‘40s. A range of events took place at the park, including car racing, boxing concerts and shows featuring the old Abbott and Costello comedy team. After the war years, it served as a sports venue for three different Paterson-area high schools.

But it fell into a state of disrepair and neglect during the 1990s — so much so that it was under threat of being demolished by the end of the decade.

That did not happen, due to concerned Paterson citizens, and in 2013 Hinchcliffe Stadium was designated as a National Historic Landmark.

Now, though, New Jersey-based BAW Development plans to completely refurbish and modernize the historic stadium, which will make the facility ADA compliant and improve the field, restrooms, lighting, scoreboard and seating areas. In addition, the redevelopment also will feature a 315-space parking garage and senior housing.

In addition to the 7,800-seat athletic facility, other elements of the project include ground-up development of:

When construction is completed on Hinchcliffe Stadium, it will become nearby John F. Kennedy High School's home field for several sports and also will serve the Paterson community as a place for concerts, festivals, sports camps and other semi-pro and professional sporting events.

The restoration of the Art Deco WPA-funded facility is the core of the Hinchliffe Stadium Neighborhood Restoration Project, which includes additional nearby facilities.

According to Ballpark Digest, the efforts to restore Hinchliffe Stadium have been going on for years; at one point the Ripken organization took a swing at a renovation plan, but in the end, the online news source said persistence and effort by Paterson area residents helped make the project succeed.

All financing for the project was managed by BAW's partner on the redevelopment, RPM Development Group. The financing is a combination of private loans, tax credits and other vehicles, including a $60 million construction loan from Goldman Sachs and $10 million in New Market Tax Credit and Federal Historic Tax Credit equity from U.S. Bancorp Community Development Corp.

As a result, renovation work began on the ballpark in April.

"When it comes to a project of this nature, there's no question that it takes a strong team to put all the pieces in place, and we are extremely thankful for the diverse group of financial partners that came together to fund the reimagination of this historic site," said Baye Adofo-Wilson, founder of BAW Development.

"Given the challenges of the last year, pushing this long-awaited infrastructure project forward required a highly complex, creative financing structure from all parties. The successful closings are a testament to our partners' belief in the vision for the future of not only Hinchliffe Stadium, but the broader impact it will have for the entire city of Paterson."