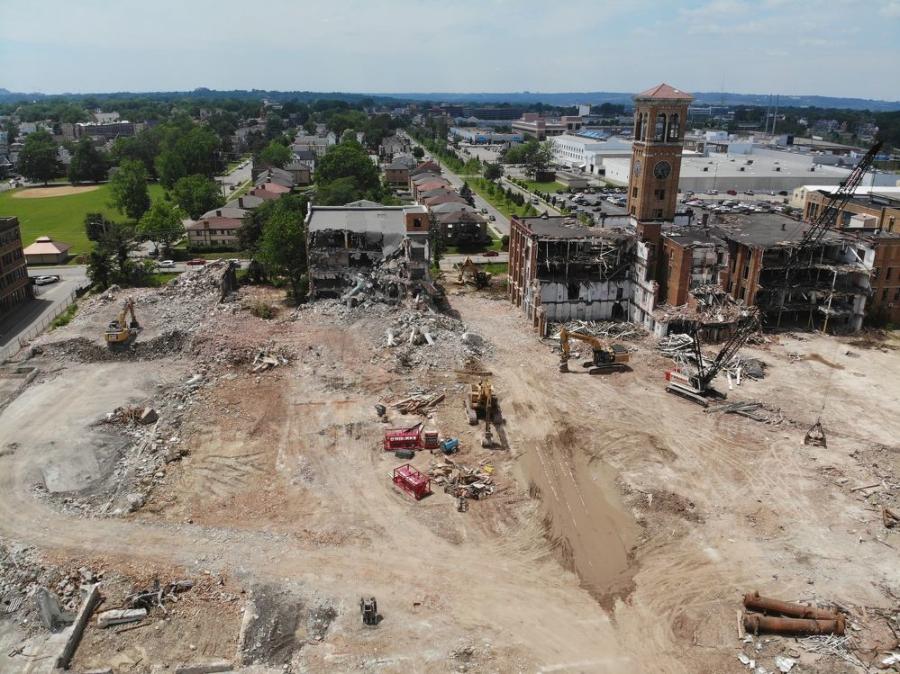 O’Rourke Wrecking Company Inc., based in Cincinnati, began the demolition of the historic former United States Playing Card Company headquarters and factory in Norwood, Ohio, last March and completed the job in October.

The historic former United States Playing Card Company headquarters and factory in Norwood, Ohio, a suburb in Cincinnati, is being transformed into a $150 million plus mixed-use development that will have more than 500 residential units; a brewery; a public market and food hall; more than 100,000-sq. ft. of retail; and two office buildings along the highway on the 21-acre site. 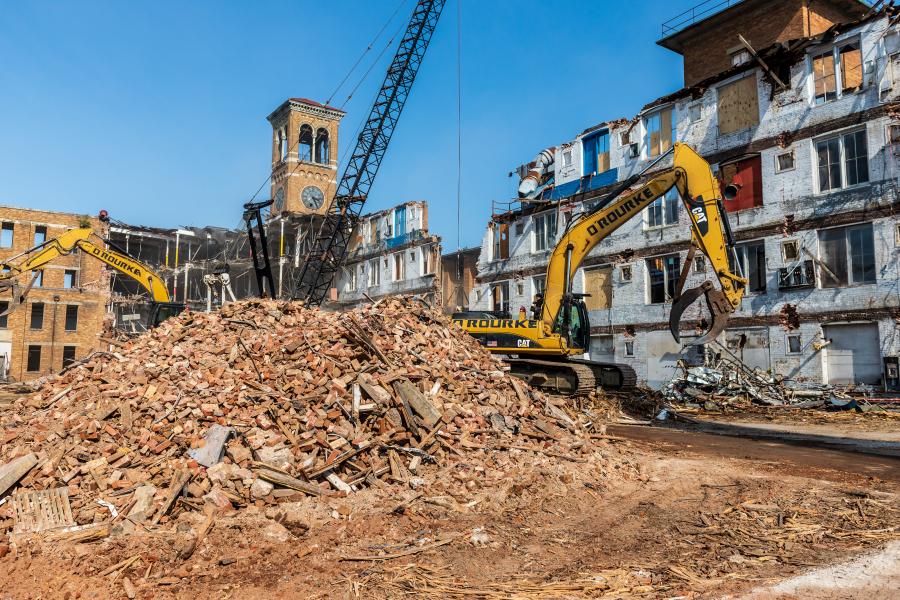 The PLK Communities development also will feature a large family-themed park, including a water feature and a dog park in the center of the project. MSA Design is assisting with the design of the new community.

The square-shaped development is bounded by Interstate 71 Beech Street and Park Avenue. The commercial center and the park are located in the middle, surrounded by residential and commercial buildings. It also features a parking garage and several small streets.

HGC Construction, the general contractor, is expected to start the three-phase construction project this spring, following EPA approvals. The main elements should take about two years to complete, with the final phases to be delivered in five to seven years.

O'Rourke Wrecking Company Inc., based in Cincinnati, began the demolition of the plant, which had several structures, last March and completed the job in October. The factory at 4950 Beech Street was built between 1899 and 1920 and was famous for its architecture and its iconic clock tower. Constructed in 1920, the clock was not only saved, but will be incorporated into the development as a gateway. The stairs will be repaired and an elevator will be installed to allow the public to view the area from the top. One of the buildings, a Neo-Romanesque structure, was designed by architect Samuel Hannaford, a native of Cincinnati, who was responsible for many iconic buildings in the city.

Also being retained is the cafeteria/machine shop which will be transformed into the market and food hall. The four-story factory building is undergoing a major re-purposing: the first floor will have ground floor retail and 340 parking spaces on three floors and the top floor will be lofted apartments.

The old power plant's smokestack also has been saved and will be a key feature of the park.

"When we develop a site, we try to make sure we understand the background of that site first," Nick Lingenfelter, PLK's vice president of development told the media. "We wanted to make sure when we designed this property, when we build it, we do it right."

In 2009, USPC relocated its production to a factory in Erlanger, Ky. The site had been vacant since the move and the structures fell into serious disrepair.

"We don't want to tear down history. It wasn't salvageable," Lingenfelter said. "So, when we look at it that way, we want to use what we can to honor the past.

"The factory is older than the city and for a long time, the private power plant helped subsidize the city when it had shortages," said Lingenfelter. "The site also had underground water wells that were used to help refill the city of Cincinnati reserves after the great flood of 1937. This site is very intertwined in the history of Norwood and Cincinnati.

"The demolition included removing an intricate system of underground tunnels that supplied all of the utilities that were generated on-site," he added. "In designing a new development, we are now reversing the historic routes of the utilities. When the project is complete, all roads and utility lines will be replaced, the rail lines will be removed and ultimately all utility access will be tied into the public services. While it sounds simple, it's a complex process."

Even though most buildings have been torn down, the bricks and wood are being recycled and reused throughout the development and in other projects across the country. 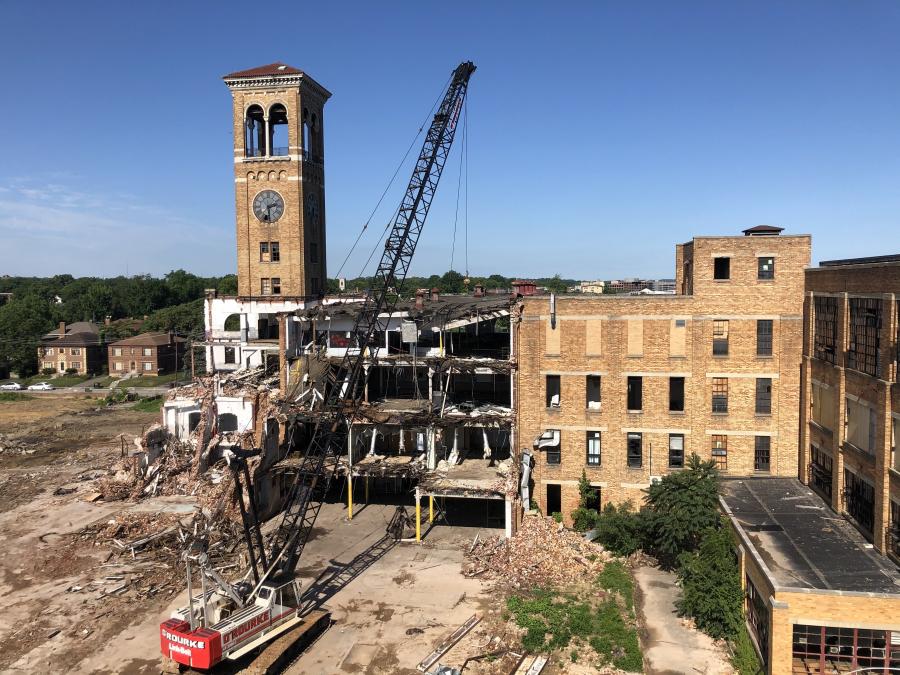 Before anything could be demolished, asbestos abatement operations, which took between two and three months, had to be completed

"We had about 20 asbestos abatement workers go into every building to remove the material," said Jeff Sizemore, O'Rourke's project manager. "There was an extensive tunnel system — a labyrinth. As we cleared the buildings, we started with the demolition. We followed all the local, state and federal guidelines. There were thousands of feet of pipe to abate. The plant had been shut down for an extended period of time and it was hard to get down into the tunnels. Water had leaked into the buildings and tunnels."

"We salvaged a lot of brick and timber," said Sizemore. "There were a lot of beautiful longleaf pine timbers, which were sorted from the debris. The wrecking operations were done very carefully to save the timbers and brick. Laborers removed the bricks from the piles, cleaned them and placed them on pallets.

Longleaf pine, an old growth pine species from the South, had been logged during the American industrial revolution. It was used for factories and large-scale structure. Although it was a softwood, it was dense and similar to red oak.

The demolition plan was based on minimizing the impacts on the neighbors in terms of noise and dust.

"We started at the back of the structures to keep the exterior walls up," said Sizemore. "We were able to keep the exterior perimeter in place for a very long time — it was quite a while before the neighbors could see into the facility or recognize that a project was going on. It was a big site with a lot of parking lots and its own street grid. We had a decent amount of space to get started as we kept going."

Critical pieces of equipment included a Link-Belt 208 crawler crane with a clam bucket and five excavators — one Komatsu PC360 and four Cats: three 349s and one 365.

"We used a crawler crane because of the need to move and relocate it throughout the site," said Sizemore. "The crane did a better job of carefully clamming the timbers without damaging them. We were able to shift them off to the side so they could be handled with Bobcat S650 skid steers instead of being picked up by grapples attached to excavators."

Removing the pipes was difficult due to their location.

"The fire hazards also were very difficult because of the wooden nature of the building," said Sizemore. "Because the facility had a residential neighborhood surrounding it, access was tight."

The work was done via days shifts, with occasional Saturday shifts. Peak days had 20 O'Rourke personnel, who self-performed all of the operations.

In addition to the timbers and brick, 20,000 yds. of concrete were removed.

"We averaged a fleet of 10 trucks a day hauling materials off-site," said Sizemore.

Serious planning went into the plan of attack for the demolition, which included the preservation of the clock tower and other structures. 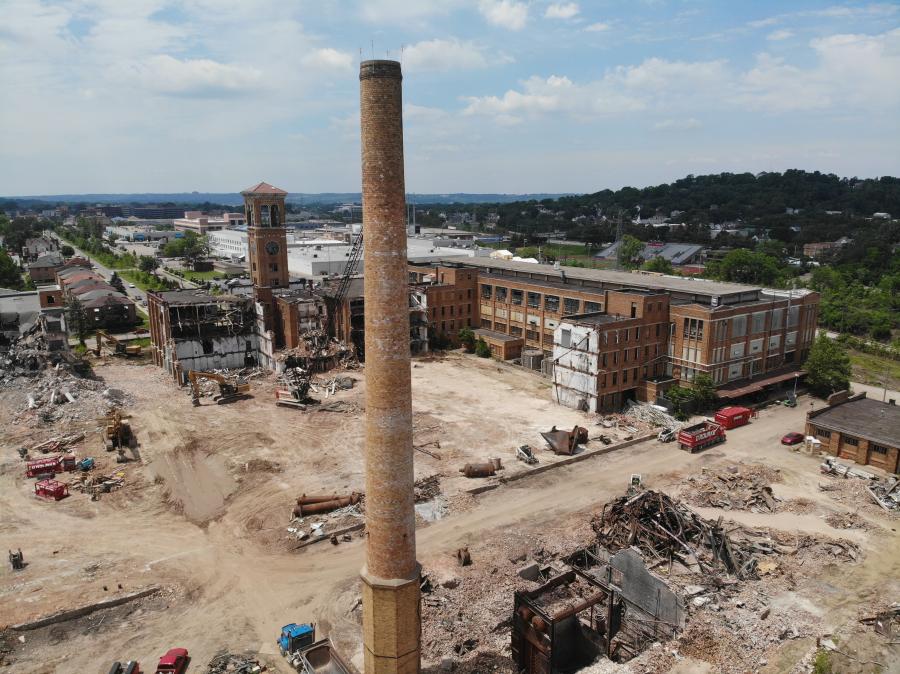 "Saving the clock tower was difficult," said Sizemore. "We had to analyze the structural stability and had to selectively demolish around the three sides of the tower and then isolate it. We used bracing so that the diaphragm of the tower wasn't compromised so that it could stand the loads."

The smokestack required another approach due to the removal of the breaching and the asbestos within it.

"The breaching went from the boiler to the smokestack and the asbestos had to be handled under environmental conditions," said Sizemore. "The other buildings that were retained had separations and walkways that connected them to adjacent buildings. We had three separations on the larger building and the cafeteria building was a stand-alone structure."

Other equipment used by O'Rourke included a Cat 973 track loader; Cat dozers — a D6 and a D8; a Cat sheepsfoot roller; and several JLG manlifts.

"We had at least one mechanic every day on-site," said Sizemore. "We have a fleet of well-maintained equipment. You have your normal breakdown issues — fuel issues and hydraulic line issues. Demolition is very hard on the equipment and if you don't maintain it constantly, it doesn't take very long for equipment to fall into a state of disrepair. It requires a lot of upfront and continuous maintenance instead of letting it go until failure.

"We try to do a lot of preventative maintenance and be proactive with things that we repair," he added, "ensuring that we stay on top of little problems before they multiply and become big ones."

"Our dealerships always support our efforts," said Sizemore. "Our local Cat and Komatsu dealerships are very strong and they carry a large inventory of parts and they are always readily available to assist us."

Despite the former factory being surrounded by a residential community, Sizemore's job was made easier in that the site was isolated one.

"It's always much harder to work in an active facility where they are trying to maintain production," he said. CEG