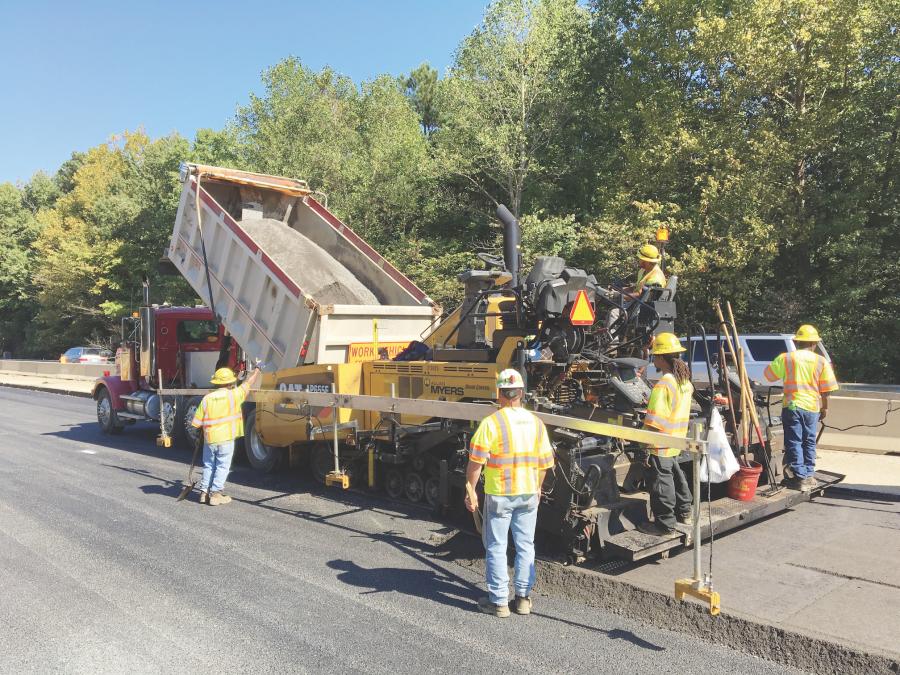 The team at Allen Myers is shown paving with a high RAP mix. VDOT contracted Allan Myers to rebuild 7 mi. of I-64 near Williamsburg using a mix with 85 percent RAP.

The future of asphalt pavements in America could be decided in the rolling hills of eastern Alabama at the National Center for Asphalt Technology (NCAT). There, on a closed 1.7-mile track, five heavily laden semi-trucks rumble around the road to simulate the stresses placed on today's interstate highways.

The 46 sections of the track bear the load of the trucks, which weigh an average of 155,000 lbs. Embedded sensors record the strains on the track and are used to determine how to best design the pavements that will carry America's traffic for the decades to come.

One of the topics being studied at NCAT is the use of recycled asphalt pavements (RAP) in building roads. Most asphalt pavements in the country must be rehabilitated after years of heavy traffic use, so the top few inches of the road are milled off and replaced with fresh asphalt. 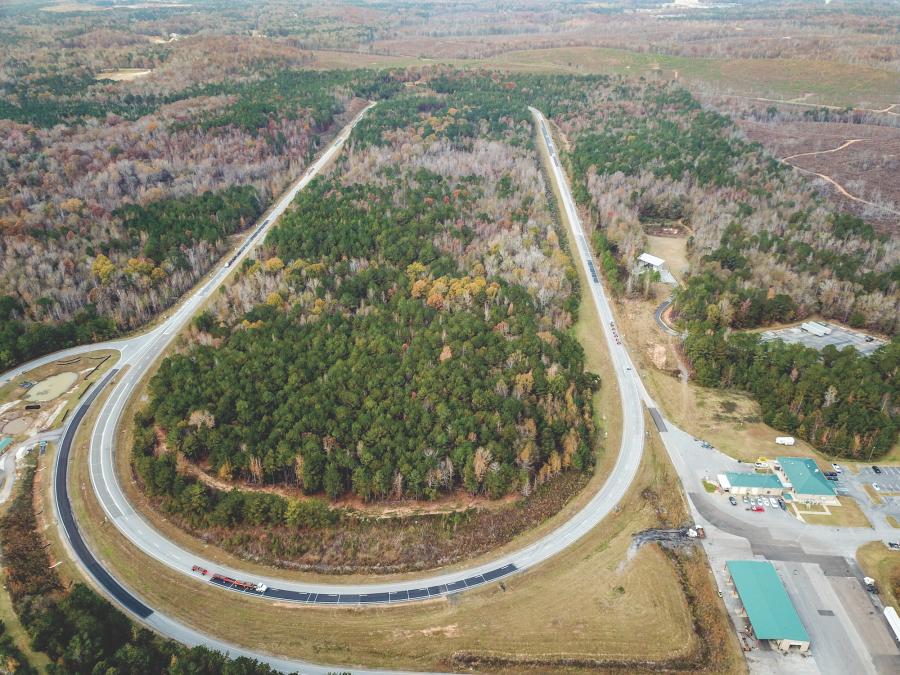 A majority of Departments of Transportation in the country regard RAP as a material that has value as it contains aggregate and asphalt cement that is necessary for the new road. But does it perform as well as new pavements containing virgin materials? That's one of the questions that NCAT is exploring. DOTs are looking at it as well with many states limiting the amount of RAP in the new roads. Several states, however, are starting to become interested in allowing increasing amounts of RAP — although they are moving ahead gingerly knowing the importance of the bottom line. State planners know that taxpayers expect them to produce excellent roads that are useable for years to come, all at a reasonable cost.

The National Asphalt Pavement Association tracks the use of RAP nationwide and announced in a recent survey that during 2018 the amount of RAP in new pavements was 21.1 percent, a new high since the survey began in 2009. More than 82 million tons of RAP were included in new pavements, with an additional one million tons of recycled asphalt shingles blended in as well. Still, the change in the amount allowed by each state generally is incremental.

"RAP should not be seen as ‘waste', but as an engineered material that can provide good service as a road-building material," said Buzz Powell, assistant director of NCAT. "We do the research here that the state DOTs direct us to do and there has been interest in increased RAP percentages in the pavement. Last season we put a 45 percent test section down with a recycling agent that was sponsored by Virginia DOT. We also have a 30 percent RAP for the control section without a recycling agent to see how they compare."

Some states are paying less attention to the percentage of RAP in a mix with most attention on the quality of the road.

"We are seeing more focus on the pavement meeting performance specifications," Powell said. "Does it meet the requirements of preventing cracking and rutting? If it does, then the increased RAP should be allowed."

Sections of the test track with RAP have performed well.

"We've been using RAP for a long time here," Powell explained. "We placed a 50 percent RAP section in 2009 and saw some great success. We also had the North Carolina DOT sponsor sections in 2006 that were 45 percent RAP. The road performance on these high RAP sections has been excellent, but we are demonstrating proof of concepts here, using high-quality materials and paving with best practices."

The NCAT Pavement Test Track is not the only place where road experiments are being conducted. Based on the test results, Alabama and other states are experimenting with using higher amounts of RAP in rural areas and elsewhere with lower volume roads where road stresses are less. 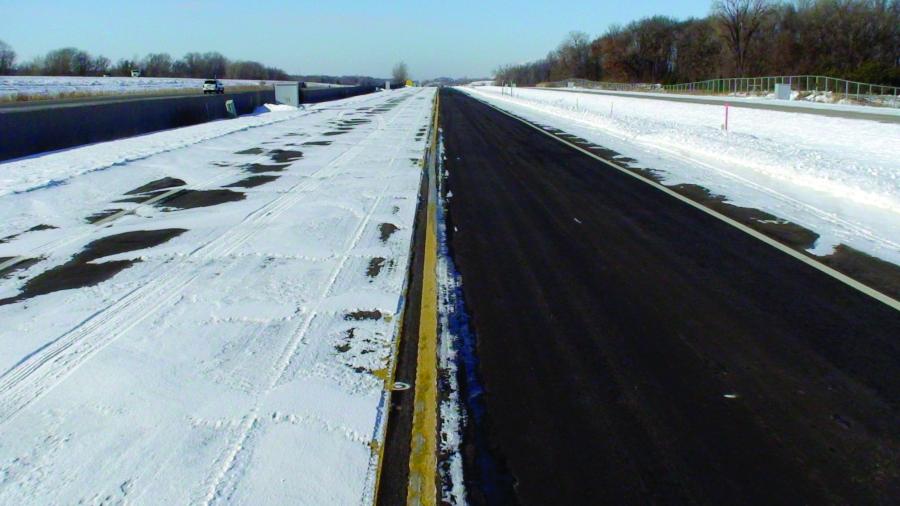 Road conditions vary from state to state, of course, and Minnesota has been testing the performance of mixes under live traffic near Albertville, Minn. Curt Turgeon, the state pavement engineer for Minnesota, noted the reliability of RAP use in pavements: "We allow 30 percent RAP in overlays and 20 percent in new roads. It's a percentage we've been allowing for at least 20 years and have had good results with it. In the future, if the contractors can use more RAP and still meet our requirements for performance, so be it."

Minnesota DOT also has seen RAP used by maintenance forces in meaningful ways. Robert Vasek, DOT maintenance operations engineer, championed the use of recycled material on road shoulders and around culverts for repair of washouts: "It's a durable material and because of the binder, it sticks together well and does not just wash away with the next rain."

Recycled asphalt and millings from other roadwork around the state are frequently used on rural roads carrying traffic through wooded areas. These natural and scenic areas can have narrow shoulders and steep inslopes. Adding wider shoulders and flatter slopes is not feasible in these areas, and washouts can create steep drop-offs that can be dangerous if a motorist allows his vehicle to slip slightly off the road. Public works teams often use RAP to stabilize these shoulders and keep motorists safer.

Like having a rainy-day fund in personal finances, RAP can be handy for variable road conditions around the state.

"The difficult weather we have here in the state can cause sudden road repair needs," Vasek said. "Having a stockpile of recycled materials and millings from previous projects can prove quite valuable."

Often the RAP needs help to be brought back to life.

"Texas is currently conducting research to responsibly incorporate higher RAP contents than what are commonly used," said David Newcomb, Materials and Pavements division head, Texas A&M Transportation Institute. "One project is investigating the use of recycling agents and another is developing methods of performance testing for use in asphalt mixture design and construction. The latter effort just started but will have up to 12 test sites across the state with multiple test sections in each."

Recycled asphalt also is used at airports but the Federal Aviation Authority (FAA) only allows the use of RAP in the base course of an asphalt section. It is not permitted for the surface course where the airplanes touch down. Asphalt paving overall is limited to using no more than 30 percent RAP.

"The asphalt work has all been done on non-controlled areas, freight lane roads and the Midfield Access Road," David Reese said. "While the airport runways are all concrete, we have used asphalt with around 25 percent RAP on parking lots and access roads leading around the airport. It's very similar to standard highway work; we haven't required any specialized equipment for the projects."

Using higher concentrations of RAP in the paving mix can be challenging. Allan Myers was the contractor on an innovative RAP project which produced 165,000 tons of Cold Central Plant Recycling Material (CCPRM) for a 7-mile job on Interstate 64 between York County and Newport News. The mix contained 85 percent RAP.

"We used cold central plant recycling that enabled us to use a much higher percentage RAP that we had collected from milling projects we had done around the state," said Craig Rayfield, Allan Myers' quality control manager for the project.

"This was the largest recycling project of its type in the country," Rayfield added. "We placed 6 in. of the high RAP CCPRM. Finally, we will place 4 in. of stone-matrix asphalt [SMA] on top, meeting the state's standard for interstate roads."

The Alan Myers team did multiple trials at night and experimented with different pavers and rollers to achieve the desired results. It purchased a specific plant for the project — the KMA 220 plant, designed and built by Wirtgen, could feed pug mill asphalt and concrete. The plant produced 200 tons/hour. 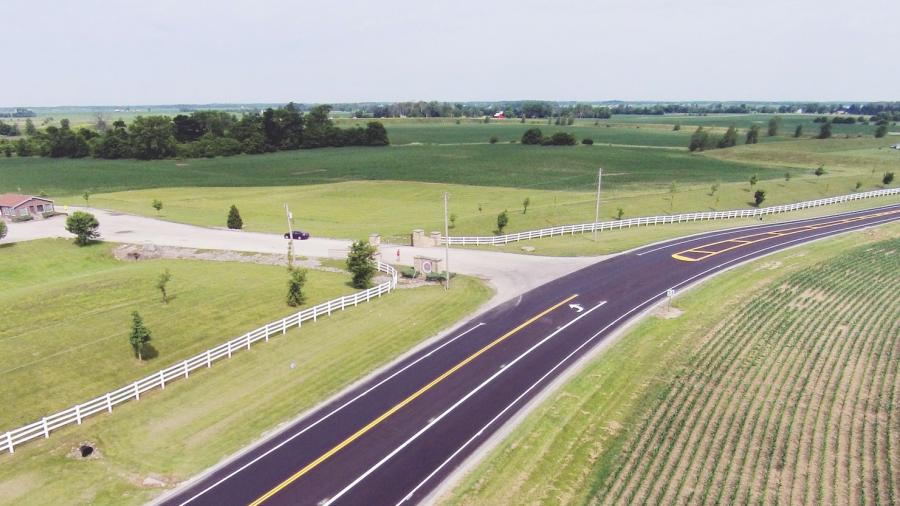 "We found the CCPRM was temperature sensitive," Rayfield said. "We discovered that 50 degrees was our limit for producing or paving with the CCPRM."

The Virginia Department of Transportation (VDOT) was very understanding when it came to specification tolerances on this material because of the variability when it came to the gradation requirements. VDOT also placed sensors in the pavement to record performance data over the coming years. A VDOT spokesman estimated that using the high amount of RAP saved $10 million and produced 50 percent fewer greenhouse gases than if the project had been conducted in a normal manner.

Minnesota DOT's Curt Turgeon had a succinct summary for the use of recycled materials in asphalt paving, stating: "We see RAP as efficient use of resources. It conserves the aggregate and the asphalt that is already present is the RAP. It just makes sense to use it." CEG