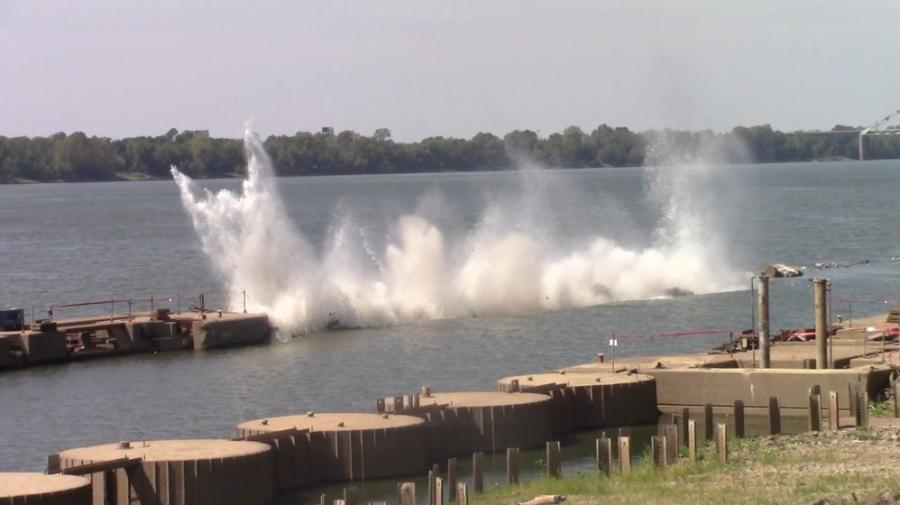 By early September, about 80 percent of lock and dam 52 near Brookport, Ill., had been demolished and all blasting work completed. (USACE photo)

After withstanding the constant and erosive flow of Ohio River waters for more than 80 years — and the efforts of the U.S. Army Corps of Engineers (USACE) to demolish them — the Ohio River's oldest locks and dams finally are disappearing below the surface, replaced by a modern facility.

Locks and dams 52 and 53 are scheduled to be history by June of next year. It will mean the end of a construction and demolition project begun way back in 1988. The historically long-running project has flowed along decade after decade like the river itself.

Building or removing navigation locks and dams on rivers is, of course, a big, big task and quite unlike most construction and demolition undertakings, because there is all that moving water with which to contend. Yet the project is vitally necessary: Controlling the flow of the water at that point is critical to the commercial use of the Ohio. 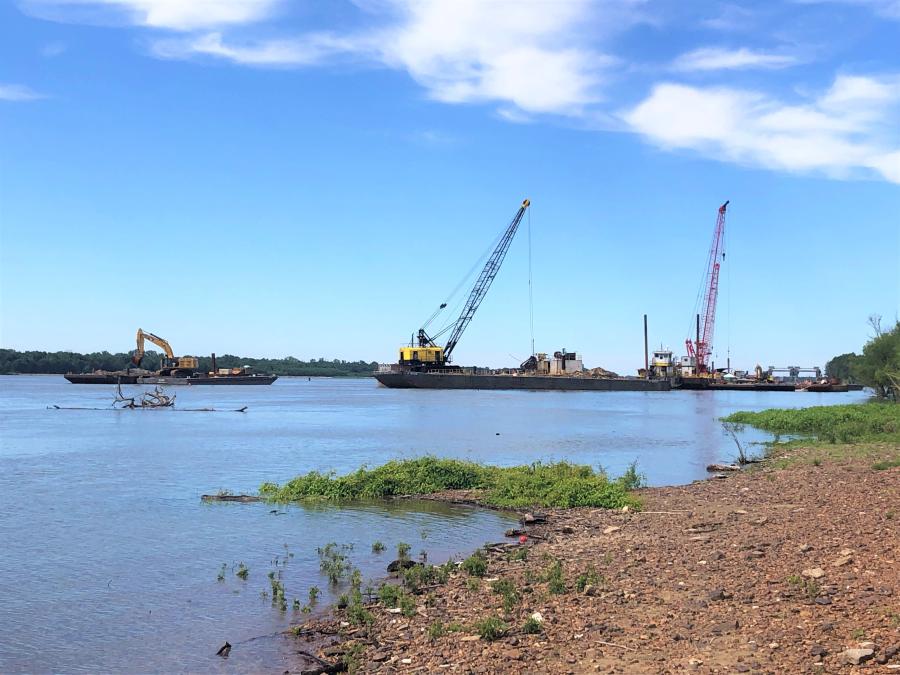 Riverbeds essentially are long downhill slopes and, without locks and dams, some sections of a river can be unnavigable in low-water seasons. USACE locks and dams essentially create a staircase of water, partly backing up moving water to create pools deep enough to float large commercial vessels. Each step of the staircase extends miles upstream to another lock and dam.

The overall goal is to create a minimum of 10 ft. of depth in the navigable channel, if not entirely across the river. In the area of the Ohio River served by locks and dams 52 and 53, the depth of water can vary during the year from 10 ft. up to 40 or 50 ft. During times of heavy flow, in fact, the tows pass right over the low-water dams.

"The river does what it wants to do," said Bill Hunter, a civil engineer with the Corps and project veteran. "Generally speaking, in the summer the river is shallow, the wickets on the dam are raised to pool the water and the locks are used. In the fall, winter and spring, the river runs high enough that the wickets are lowered and the locks are not needed."

The systematic corralling of the water is an economic necessity. This stretch of the Ohio River has been called the hub of the nation's inland waterways with ships containing some 90 million tons of goods floating by each year. In low river-flow periods, antiquated locks and dams 52 and 53 sometimes required up to 20 hours for passage of a vessel, which meant tows lined up to pass through the locks.

To eliminate the bottleneck, a new lock and dam a mile downstream from lock and dam 53 was completed in 2018. The new Olmsted Lock and Dam reduces the time of passage for ships during low-water periods to less than an hour. With the new facility complete, getting the old locks and dams out of the way is the job at hand. C.J. Mahan Construction Company of Columbus, Ohio, is the project's prime contractor.

Mahan's task is to methodically remove the steel and concrete components of the locks edging the Illinois shore as well as the steel and wood parts of the low-profile dam, or weir, that stretches for nearly a mile to the Kentucky side of the river. The mechanical devices being removed include gates, moveable wickets and so-called bear traps, which are larger flow-control assemblies in the dams. A segment of the weir on the Kentucky side is a fixed height and doesn't have wickets.

The dam will not be entirely demolished, just enough to ensure that the bottoms of the largest commercial vessels can clear it. Lowering the dam's height the entire width of the river is important.

"Fifty years from now, a different part of the river might be considered the navigable path," Hunter pointed out. "We want to make sure we don't leave behind any can openers." 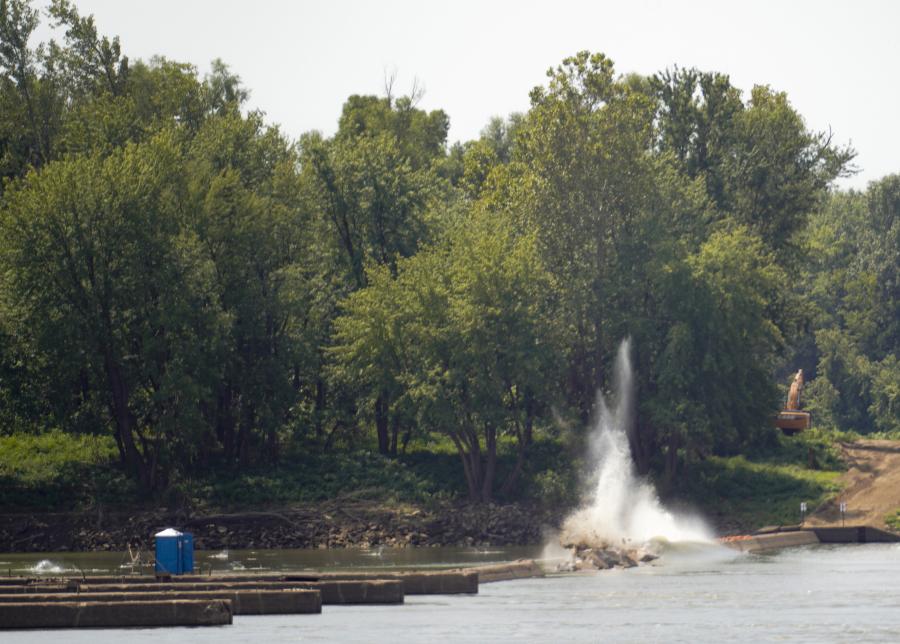 The older of these structures was built in 1928. Contractors worked behind wooden cofferdams that gave them a more-or-less dry river bottom on which to form and pour concrete walls. In 2021, removing the structures is an entirely different proposition. Demolition crews and their machinery work from floating barges to salvage the moveable gates, or wickets, and then explosively shatter and remove the structure.

Mahan subbed out the blasting work to a Weldon, Mo., firm, Kolb Grading.

"Kolb is drilling through the tops of the walls and placing charges inside," said Hunter. "The charges shock the concrete wall, breaking it into manageable pieces, which Mahan plucks from the water by barge-mounted excavators and loaded onto a materials barge."

When a series of 32-lb. charges fail to reduce the concrete to where an excavator can handle it, a hydraulic breaker attached to the end of a boom chips it down to size. The rubble-laden barge is then floated to a designated area for disposal.

By early September, about 80 percent of lock and dam 52 near Brookport, Ill., had been demolished and all blasting work completed. Whereas demolition of lock and dam 53 about 23 mi. downstream was only 20 percent finished. Being disassembled are the original 600-ft.-long lock and a second one twice that length built in the 1970s of steel sheet piles.

At lock and dam 53, C.J. Mahan is working from several barges, the largest one being 13 ft. deep, 155 ft. long and 52 ft. wide. From the floating platforms, Mahan extricates shattered rubble using several Hitachi and Caterpillar excavators and a Komatsu long-reach excavator. For heavy lifts, the company calls on a pair of Manitowoc cranes — a model 4100S2 or 777 200T.

Some of the steel components being scrapped from the locks and dams require even heavier lifts. The miter gates on each end of a lock are about 60 ft. wide and 30 ft. tall and weigh 65 tons. Because the gates are not reusable, they are scrapped. The granddaddy of lifts on the project was at dam 52 where the contractor had to remove a bear trap leaf that measured 91 ft. by 33 ft. and weighed 237 tons. A Pittsburgh, Pa., firm, River Salvage Company, was called in to remove the trap utilizing one of its floating A-frame cranes.

While the work is progressing toward an anticipated June finish, Hunter cautions against assuming the work actually will be completed then.

He should know. Since 1993, Hunter has been there overseeing the project to replace the two locks and dams with a modern river-flow facility. For 28 years, that is, he has monitored the progress of the slowly moving project. 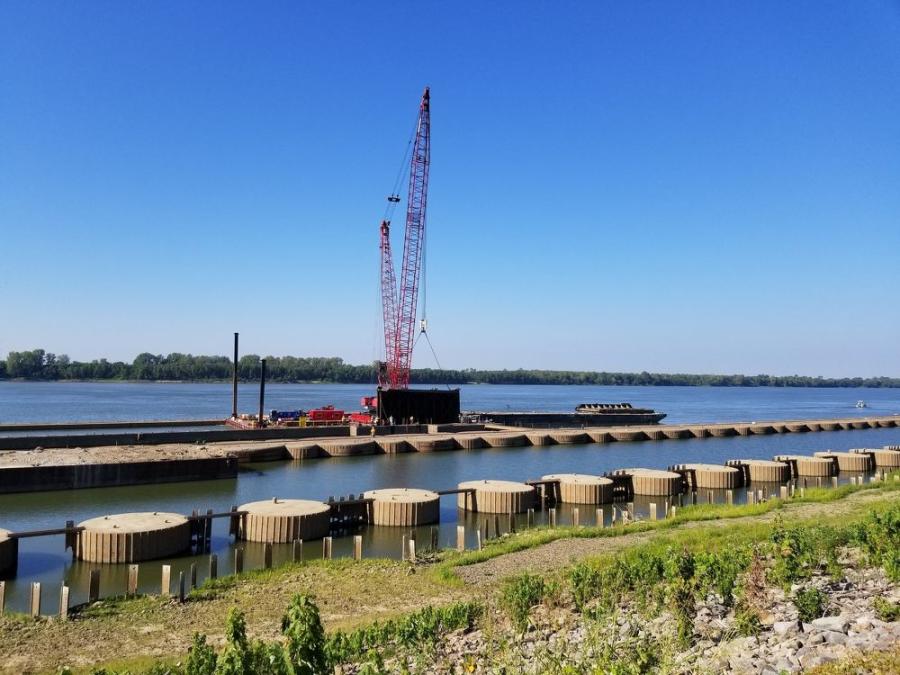 Apparently, the tribulations involved in constructing and deconstructing marine facilities fool planners. Such factors as seasonal water flows and the variable velocity of the flows, deterioration of structures functioning well past their designed lifespan and subsequent funding issues translate into delays.

"Every project has a wrench or two thrown at it," Hunter said. "I would expect a few more wrenches. What those wrenches will be, I can't say."

The project that was first budgeted by Congress in 1988 was projected to cost $775 million and to be completed in 1998. By 2016, the job had been re-scheduled to wrap up no later than 2026 at an estimated cost of more than $3 billion. In that schedule, the Olmsted Locks and Dam were to be operational by 2020 but actually were operating two years before that. Still, the undertaking commonly is characterized as the longest and largest civil works project in the history of the Corps of Engineers.

"I've heard that statement," Hunter said. "There possibly is some credence in it. I think there are a number of reasons for it. One is that the funding for the job did not go optimally. We could have used more money early on and that extended the project, which meant salaries were paid for more years than expected. Then there's the inflation factor."

As is said, the more things change, the more they stay the same. The old locks and dams slowly being dismantled at a cost of $30 million are not so much obsolete as they are worn out. The new facility might look quite familiar to contractors building the old one in 1928.

While the dams being deconstructed were the last ones with moveable wickets made of timber, the new Olmsted Lock and Dam also has wickets that can be raised and lowered to control the flow of the river in low-water seasons. The difference is the new wickets are fabricated of steel. They also are 10 ft. wide and 28 ft. tall, each dimension roughly double the size of the old ones. The dam will be the only one on the Ohio River with wickets.

Hunter has been an eyewitness to the transition from old to new. He joined the Corps of Engineers in 1979 and four years later continued working with the Corps as a civilian engineer. Beginning in 1993, he has worked almost exclusively on the project. Yet he declines to call himself the project expert.

"I'm the survivor," he said. "We recently tore down an office building that we worked out of, a structure that I was involved in building. It was a strange feeling to see something you built come down all these years later."

Now if Hunter can hang on long enough to see the rest of locks and dams 52 and 53 come down, he can help bring some closure to the project. CEG