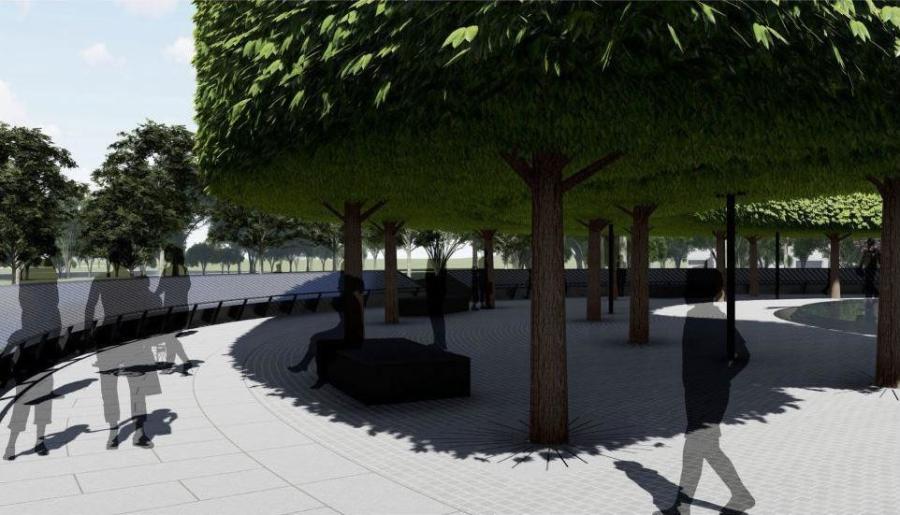 The sloped, granite Wall of Remembrance will encircle the existing Pool of Remembrance, complementing the original design of the memorial. (NPS graphic)

Construction on the Wall of Remembrance and an overall rehabilitation of the Korean War Veterans Memorial on the National Mall in Washington, D.C., was started in mid-March.

The wall is a new, permanent addition to the memorial that will include the names of 36,574 American servicemembers and more than 7,200 members of the Korean Augmentation to the United States Army who gave their lives defending the people of South Korea.

The sloped, granite Wall of Remembrance will encircle the existing Pool of Remembrance, complementing the original design of the memorial. The circular plaza around the pool will be extended to accommodate the wall, and two new pedestrian paths will provide access to the memorial from Ash Road and Independence Avenue.

During the construction of the Wall of Remembrance, the National Park Service also will rehabilitate the 25-year-old memorial itself.

Crews will repair pavement, replace the engraved names of participating countries and casualty figures with stainless steel letters, refinish the stainless-steel statues, replace the linden trees around the Pool of Remembrance, replace the juniper trees in the Field of Service, update the existing lighting with high-efficiency LED lamps, and install a new irrigation system that will extend the life of the linden trees.

The first phase of the work will require the removal of the existing linden trees that surround the Pool of Remembrance; new trees will be planted when the construction is complete.

The Korean War Veterans Memorial will remain open during the 18-month construction project, though some areas, including the Pool of Remembrance, will be inaccessible during the work.

The project is expected to be completed by summer 2022. Funding for the approximately $22 million effort is being provided entirely by donations from the people of the United States and the Republic of Korea.

The alterations to the memorial have been approved under the Commemorative Works Act, which includes approval of the design, construction and location of the new features by the District of Columbia State Historic Preservation Office, Commission of Fine Arts and National Capital Planning Commission.