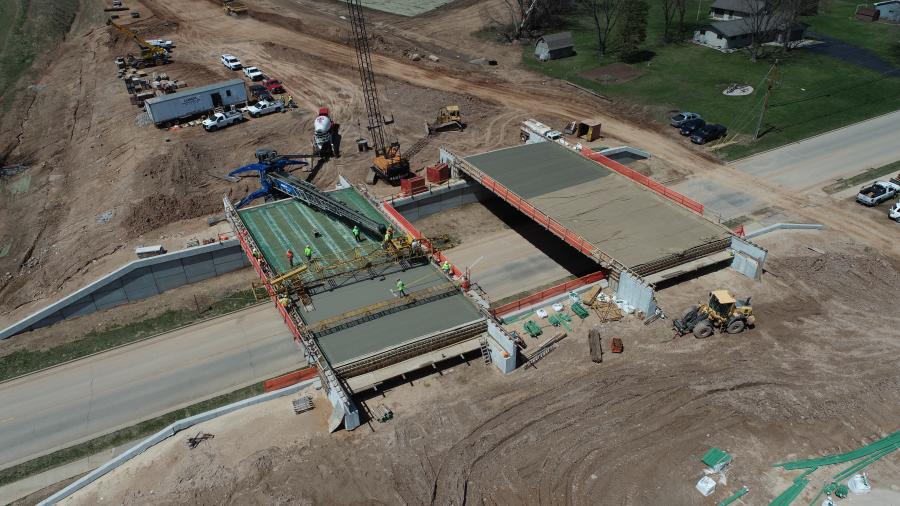 To improve safety, construction crews in Outagamie County, Wis., are making changes to a hectic commuter route between New London and the Fox Cities area. The $136 million project includes building a bypass at Hortonville and providing wider roadways to New London. The job calls for two roundabouts on each side of Hortonville, where the new bypass will meet with the existing WIS 15. 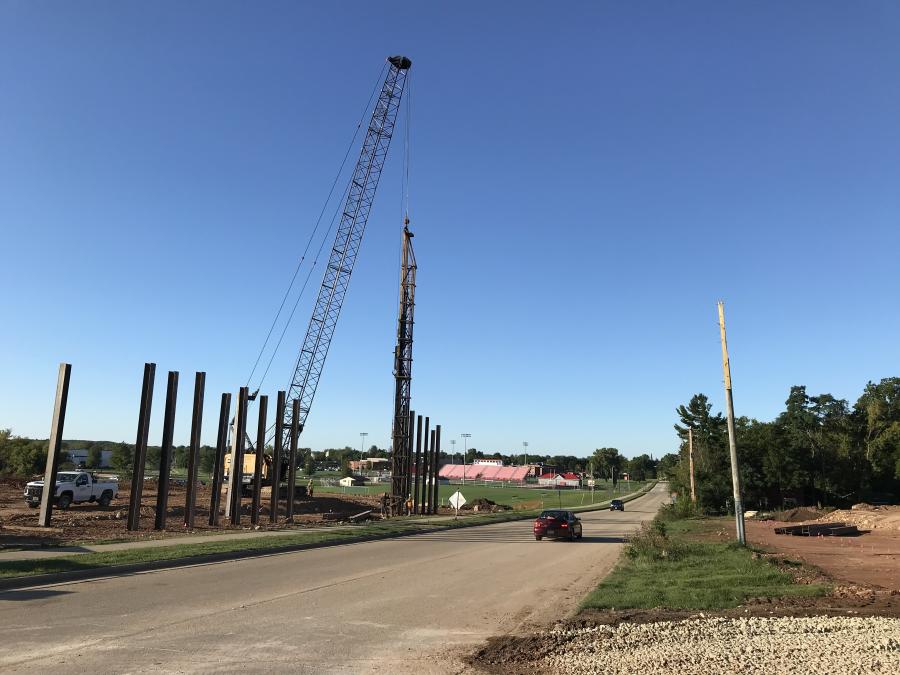 "There also was a significant increase in severe/fatal crashes during this timeframe. While WisDOT implemented several interim safety measures in the short-term, the only long-term solution is a four-lane limited access expressway."

Bertrand noted the most recent forecasts confirm the steady traffic increases along the corridor.

"Current standards dictate that rural arterials should be considered for four lanes when approaching 15,000 average daily traffic [ADT]. The east segment of WIS 15 exceeds the ADT threshold and the west segment meets that threshold. Based on the actual and forecasted traffic volumes, the existing highway geometric issues, the heavy truck and bus volumes and the mix of local and through traffic, the expansion to four lanes remains justified."

Heavy regional traffic currently conflicts with local traffic, impairing the operations of WIS 15 through Hortonville. The construction of a WIS 15 bypass of Hortonville will separate the regional from local traffic.

"The pavement condition also has deteriorated and is nearing a point where a major reconstruction is needed," said Bertrand. "There are several vertical curves that are substandard and may contribute to operational and safety issues."

There are roughly 300 existing access points within the project limits. These access points, in combination with growing traffic volumes, provide opportunities for collisions.

"The traffic and safety issues can only be fully resolved with the proposed expressway that includes an expansion to four lanes and a limited-access bypass of Hortonville. Safety and operational issues along the existing corridor would continue to escalate without this improvement."

The ongoing construction is expected to boost economic development and lower transportation costs.

"WIS 15 connects the Appleton Metropolitan area with Hortonville, New London and other local communities. Capacity expansion of WIS 15 will allow the facility to connect the U.S. 45 bypass of New London and WIS 15 to I-41 and Appleton, providing important system linkage for the region.

"The Hortonville bypass still provides a high level of access with roundabouts on either end of the village, but it removes heavy through traffic from the downtown area, thus improving safety and allowing the local community to thrive."

The project is funded through the WisDOT major projects program that generally represents 80 percent federal funds and 20 percent state funds. Bertrand said construction was staged to make use of available funds in specific years, while also minimizing impacts to local businesses, residents and communities.

"The three segments also have unique elements that made it logical to separate them. The bypass is on relocation with very large cuts/fills and eight new bridges. However, given that the bypass is in a new location, it can be completed with relatively little impact to area traffic. Both the east and west segments generally follow the existing WIS 15 corridor and must be staged due to existing development along the roadway. 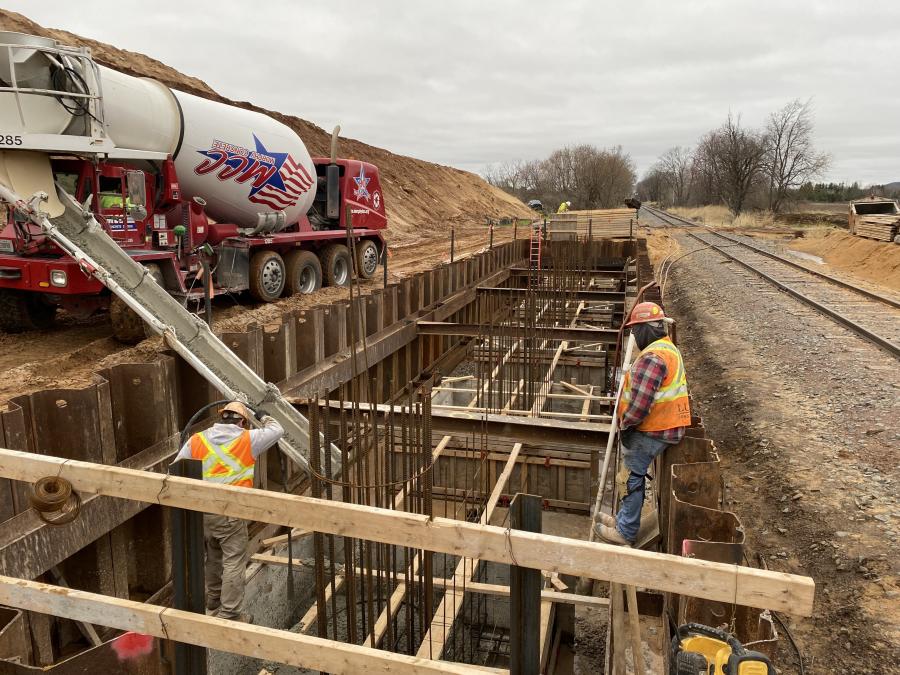 Last year, mainline WIS 15 motorists were not affected by the construction since it occurred on the bypass segment away from live traffic. During 2022, there will be a one-month closure on the east segment of WIS 15 while the at-grade railroad crossing is reconstructed. Traffic will be detoured via WIS 76 to County JJ. The remainder of construction during 2022 will be staged to maintain traffic on existing WIS 15. There will be some short-term closures of local side roads while new connections are completed.

During 2023, WIS 15 will be closed on the west side of Hortonville while the WIS 15/County T roundabout is constructed. Traffic will be detoured via I-41 to U.S. 10 to U.S. 45. Officials expect to fully open the bypass and east segments of the new four-lane expressway to traffic in late 2023.

During 2024, WIS 15 will be closed to traffic from U.S. 45 to County T (just west of Hortonville) while the west segment is constructed. Traffic will be detoured via County T to County TT to U.S. 45.

As for how commuters are responding to the work, said Bertrand, "There were minimal delays to traffic in 2021, so we have heard little from motorists, thus far. We encourage motorists to be patient and remain alert when driving through the work zone during the remaining construction, so that drivers and highway workers can remain safe."

The WIS 15 four-lane expansion will be a much-needed improvement for the overall region and local communities. The original environmental impact statement for this corridor was approved in 2009. WisDOT will have invested more than two decades of effort into this project by the time it fully opens to traffic in late 2024.

The undertaking includes constructing a $25 million, 3.5-mi. bypass. One of the main challenges for crews on the project has been building the initial haul road through the marsh, which progressed slowly because of the large volume of unsuitable marsh material that needed to be removed.

Weather also has been an issue. Depending on rainfall amounts, work could be suspended for several days at a time. Black Otter Creek is the furthest point from any access point from public right-of-way, so this required haul roads to be constructed from each direction to allow for construction access. A temporary bridge was placed over Black Otter Creek to expedite the moving of equipment from one side of the creek to the other.

Most recently, structure crews have been placing retaining wall panels, setting piling and pouring concrete piers. The grading crew is working on removing cut material from the hill and removing remaining marsh on the east end of the project. The contractor also is placing cross culverts and median inlets, and finishing grading some ditches by placing topsoil and seeding.

All storm sewer and pond pipes have been placed, four of five retaining walls and 11 cross culverts have been completed and 500,000 cu. yds. of embankment was moved. Crews excavated and backfilled 95,000 cu. yds. of marsh material in five months and completed two bridges in a span of three months.

As for unanticipated issues, there was a larger than expected quantity of landfill excavation, with cost and quantity twice the amount originally estimated.

The railroad was sold from Canadian National to WATCO; however, the transition went smoothly, and the coordination with the new company has gone well.

Building the bypass includes constructing eight bridges, including two over the WATCO railroad line on the far west end near County T.

The earth work involves placing 1.2 million cu. yds. of embankment, with more than 400,000 cu. yds. needed from offsite. The fills and cuts are up to 30 ft. high/deep in some areas. More than 350,000 cu. yds. of cut material needs to be long hauled more than a mile to placement. A total of 127,000 cu. yds. of marsh excavation and backfill also is needed.

Grading work included moving common material and spreading it throughout the project and obtaining borrow and placing it where applicable. Currently, approximately 50 percent of the embankment has been placed. The marsh excavation and backfill is roughly 80 percent complete. 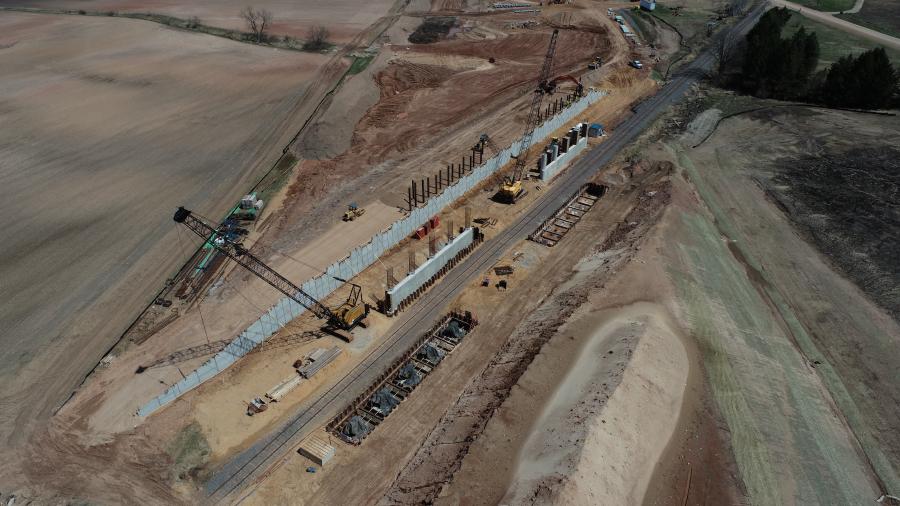 Materials being used include sand, clay and rocky clay for the subgrade; MSE wall backfill behind the retaining walls; structure backfill at the bridge abutments and breaker run at entrances; select crushed subbase; 1 ¼-in. base aggregate for base material; 9-in. concrete pavement; and some asphalt for shoulder, multi-use path and side road connections.

Bertrand said WisDOT recognizes the numerous benefits the new WIS 15 four-lane expressway will provide to the region and the local communities along the corridor, once completed.

"Outagamie County and the area communities have shown strong support for this much needed improvement, and WisDOT has worked closely with them for the last 15 years through the environmental and design phases. It's extremely gratifying to see construction under way on this project." CEG